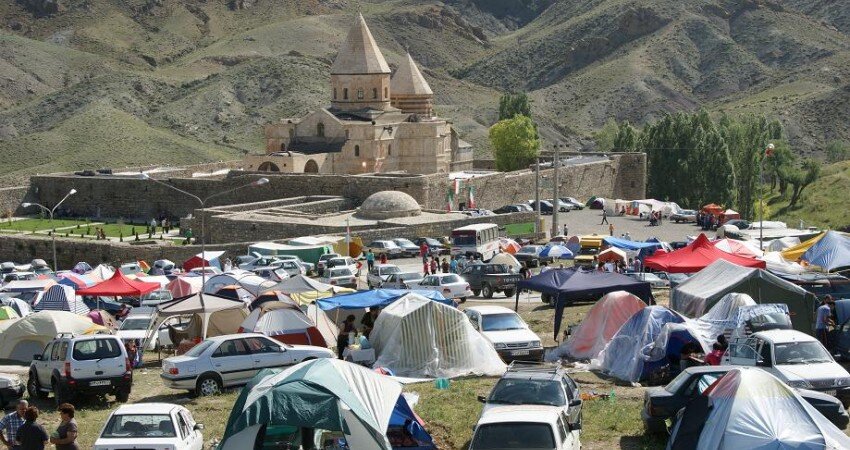 Over 3,000 Armenians on pilgrimage at St. Thaddeus Monastery

TEHRAN – Over 3,000 Christian worshippers, who are natives of Iran or other countries, are on pilgrimage at St. Thaddeus Monastery, which is located in Iran’s West Azarbaijan province.

The essential core of the pilgrimage, called Badarak, was held on Saturday, attended by guests from Iran, Armenia, Syria, Lebanon, the Netherlands, France, Austria, Germany, Canada and some other countries, IRNA reported.

The province’s cultural heritage department has endeavored to provide the necessary infrastructure, including camping sites, sanitary services, catering services, outdoor lighting, and setting up tents for ritual ceremonies and other services, chief of the department Jalil Jabbari said.

Baptism of children and youngsters along with performances of traditional songs and dances are amongst highlights the event.

The festivity is of high importance for Iranian-Armenians who mostly come from the cities of Tabriz, Urmia, Tehran, Isfahan and Qazvin, to stage the reunion in groups and families. It also provides them an opportunity to go on holiday and visit distant relatives.

Attendees commemorate the martyrdom of St. Thaddeus, one of the twelve disciples killed while he was preaching the Gospel. The legend says, a church dedicated to him was first built in 68 CE where Qareh Klise is standing.

Thaddeus was an apostle of Christ and the ceremony is rooted in the last supper with Jesus Christ on the night of his arrest and execution by the Roman soldiers.

Also known as the Qareh Klise (“the Black Church”), the monastery is one of the oldest surviving Christian monuments in the country. It is situated in Chaldoran county some 20 kilometers form Maku, adjacent to the borders of Armenia, Azerbaijan and Turkey.

The ancient Church shows off elaborate bas-reliefs of flowers, animals and human figures on its façade and exterior walls. It bears verses of Old and New Testament in Armenian calligraphy as well.

Together with St. Stepanos Monastery and the Chapel of Dzordzor, Qareh Klise was placed on the UNESCO World Heritage list in 2008 under the name “Armenian Monastic Ensembles of Iran”. All the three sites are located in West Azarbaijan and are of high significance from historical and cultural perspectives. They bear credible testimony to interchanges with the ancient regional societies in particular the Byzantine, Orthodox and Persian.

UNESCO has it that the churches bear examples of outstanding universal value of the Armenian architectural and decorative traditions.