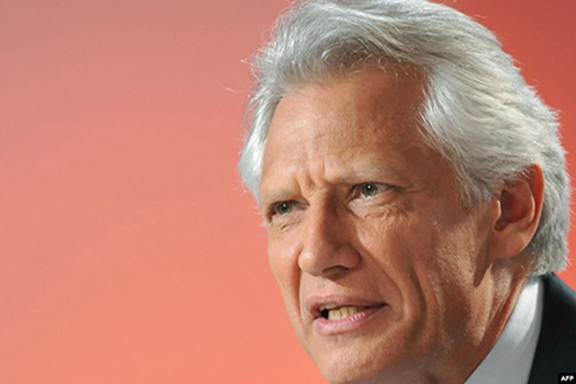 YEREVAN (Azatutyun.am)—Dominique de Villepin, a former French prime minister, has been appointed to the governing board of a newly established Armenian government fund tasked with attracting foreign investment in Armenia.

The Armenian National Interests Fund (ANIF) said on Tuesday that the appointment is part of its efforts to bring together a “world-class Board of Directors” that will help it achieve its goals.

Papazyan described Villepin as an “ally” of Armenia. He indicated that the appointment was recommended and facilitated by President Armen Sarkissian.

“Joining ANIF’s Board of Directors begins an exciting new journey,” the statement quoted Villepin as saying. “Like France, Armenia has recently lived through a significant rejuvenation of its political landscape.”

Villepin, 65, served under France’s former President Jacques Chirac as his chief-of-staff, foreign minister and ultimately prime minister from 2005 and 2007. He is famous for announcing Chirac’s refusal to join the 2003 U.S. invasion of Iraq in an impassioned speech at the United Nations. ANIF mentioned the “momentous speech” in its statement.

The Armenian government set up ANIF in May. It said the fund headed by Deputy Prime Minister Tigran Avinyan will provide advice and assistance to foreign investors interested in Armenia. Economy Minister Tigran Khachatryan said it will likely focus on investment projects exceeding $10 million.

ANIF says on its website that it will also “co-invest alongside top global investors and industrial partners in large-scale projects” to be implemented in “crucial sectors of the Armenian economy and infrastructure.” In June, the fund signed a “cooperation agreement” with a similar agency operating in Russia.