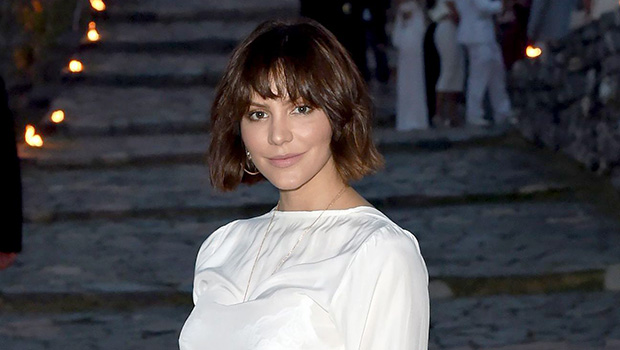 The first photos of Katharine McPhee’s wedding dress are here, and you’re going to need to sit down for this! The ‘American Idol’ star pulled up to a London church in an elegant ballgown straight out of a fairytale.

This was no modest column gown — Katharine McPhee, 35, brought out the volume and lace to her wedding with Canadian composer David Foster, 69, on June 28! It was only fitting that the American Idol runner-up’s wedding dress match the elegance and pomp to the venue of her nuptials, the St. Yeghiche Armenian Apostolic Church in Kensington, London. The historic parish was built in 1867, and currently holds the title of Great Britain’s largest Armenian Apostolic Church. The beautiful bride wowed in a ballgown-style dress that featured a skirt with layers upon layers of lace, and a strapless bodice. Mrs. Foster swept her hair into a low bun, affixed with a veil that matched her wedding dress.

London’s weather can be unpredictable, and so Katharine had to keep all that white fabric dry under an umbrella as she walked inside the church! The groom was also pictured, who maintained his silver fox image in a slim-fit black and white tuxedo, complete with bow tie and shades.

Katharine exchanged vows with David in front of an estimated 100 wedding guests, according to Us Weekly. The “My Destiny” singer also confirmed the wonderful news on Twitter, and even threw in a fun fact about her new husband: “Exactly 13 years ago today my very first single, Somewhere Over The Rainbow, was released right after Idol. Today… I’m marrying the man who produced it. Life is full of beautiful coincidences, isn’t it? Thank you for taking me over the rainbow, David. ❤️.”

Before standing on the altar, Katharine treated herself to a facial and face mask on the morning of her big day. These are her bridal secrets, as she wrote on her Instagram Story, “The secret to a calm and collected bride. And maybe a little Xanax. But this girl makes me feel soooo good.”

Katharine first met David on the set of her claim to fame: American Idol! It was 2006, and the former contestant sang “I Have Nothing” — Whitney Houston’s classic, written by none other than her future husband. But the romance rumors didn’t swirl until more than a decade had passed, when Katharine and David were spotted putting on PDA during a dinner at Malibu’s Nobu in May 2017. By July 2018, they were engaged — and here we are now, ooh’ing and aww’ing at their wedding attire! This is Katharine’s second marriage, after divorcing actor Nick Cokas in 2016, and David’s fifth marriage, after divorcing Yolanda Hadid in 2017.