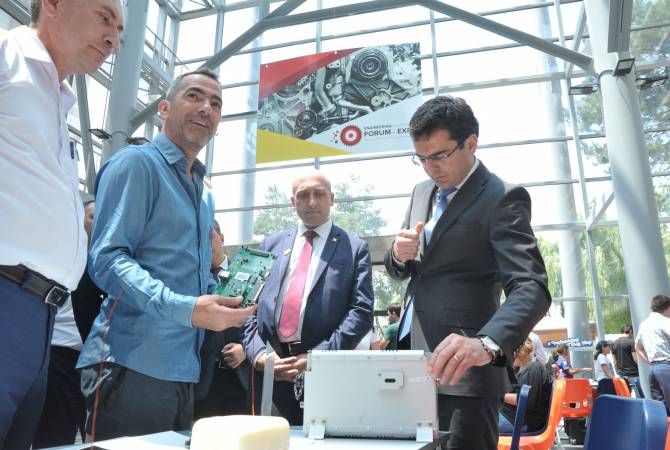 YEREVAN, JUNE 28, ARMENPRESS. Armenians have “big brains”, says retired French-Armenian footballer Youri Djorkaeff, who was in attendance at the closing ceremony of the Armenia: Engineering Week events in Vanadzor.

“I knew that Armenians have big hearts, now I know that they also have big brains,” he told reporters, emphasizing that it is highly important to utilize the existing energy and creative mind not only within Armenia but also abroad.

Djorkaeff visited Vanadzor accompanied by Minister of High Tech Industry Hakob Arshakyan. He thanked the minister for the trip. “We were talking yesterday and he told me that he will come here to Vanadzor. I asked him whether I could join him and see Armenia’s future, because here you can feel the people’s inspiration and potential. Before speaking about football it is important for me to see different things in Armenia. It is very pleasant for me to be outside Yerevan. This is a small country but the people are good in all cities. It is important for me that people in all cities across Armenia know that I love traveling in Armenia.

Arshakyan in turn emphasized that he attaches great importance to Djorkaeff’s presence at the event.

“It is very important that Mr. Djorkaeff is here. The attention of the football world and our Diaspora will be directed on Vanadzor because the renowned footballer, the world champion is here,” Arshakyan said.

The minister also called on all other famous Armenians to visit similar events for promotion.