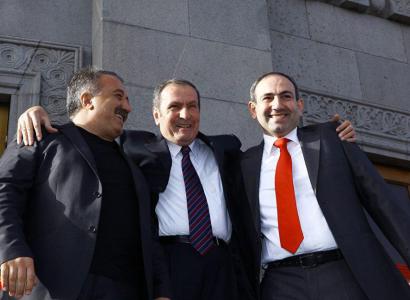 When the first instance court of Yerevan rendered a verdict to release former President of Armenia Robert Kocharyan from custody and dismiss the criminal case against him a month ago, many believed that reasonableness had finally won, and one got the impression that the shift of power would eventually end with national solidarity, not political persecution, writes Politnavigator.

What was eye-catching was the fact that the criminal prosecution of incumbent Prime Minister of Armenia Nikol Pashinyan against Robert Kocharyan was considerably dictated by two factors: win the strong political opponent and settle a score at the same time.

As is known, in 2008, Pashinyan was one of those who provoked the mass disturbances that left 10 people dead and more than 250 injured. An investigation confirmed his participation in those tragic events, and avoiding criminal liability, Nikol Pashinyan, who would become the future Prime Minister through a Maidan, escaped.

In 2009, Pashinyan surrendered to the authorities, and in 2010, he was sentenced to 7 years in prison, yet almost a year later, he was released by amnesty.

As it is clear now, since 2008, Pashinyan had been developing plans to settle scores with his political opponents.

Occupying the seat of Prime Minister based on the results of a Maidan revolution and elections, Pashinyan launched another investigation into the events of 2008 and the criminal prosecution against a group of people who had power at the time, accusing them of state treason.

The new government set the objective to do whatever it takes to prove the guilt of the former authorities led by Kocharyan. There were other criminal cases instituted against former military servicemen who hadn’t let Pashinyan and the supporters of Levon Ter-Petrosyan (defeated in the presidential elections) seize power in the country.

By implementing reforms in the judiciary and advocating a free judicial power, Pashinyan is obscenely using the judiciary to settle scores with his opponents.

This was the case when Saakashvili came to power after the “revolution of roses” in Georgia. Saakahsvili, who had head problems, first began to pursue his opponents and settle scores with them, after which he stomped over his opponents and ordered to receive accounts about his former political allies.

After coming to power, Saakashvili was deprived of Georgian citizenship, several criminal cases were instituted against him, and he is hiding from all that in either Ukraine or the US or Lithuania or Poland.

After a Yerevan court of general jurisdiction rendered a decision to release former President of Armenia Robert Kocharyan, the Prime Minister’s supporters took to the streets of the capital of Armenia after the call that Pashinyan made. Pashinyan was so worried that Kocharyan might avoid showing up at court that he made unlawful calls to the people to close the entrances to courts, promising a complete change of the judiciary.

Throughout June, Pashinyan’s supporters were fighting to appeal the decision of the general jurisdiction court and to remand Robert Kocharyan again.

It is noteworthy that the Criminal Court of Appeal saw how the new elite solves problems and paid heed to the incumbent authorities’ desire, and Judge Danielyan upheld the appeal of the Prosecutor General’s Office and remanded Kocharyan again.

Kocharyan’s attorneys are preparing to appeal the overtly biased decision to the Court of Cassation. The former leader of Armenia said the following to journalists: “You saw everything. There is no law, no lawfulness”.

Nevertheless, to not intensify the situation, Kocharyan voluntarily came to the place of imprisonment of the National Security Service, greeted his supporters gathered near the building, hugged his son and bid him farewell.

The former president’s supporters say they will continue their struggle for Kocharyan’s release. When Kocharyan was in prison in July 2018, he had given an extensive interview in which he had called on the public to unite and fight against the Maidan regime as members of the opposition.

The narrow-minded policy of the incumbent government of Armenia will inevitably turn into an internal conflict within the republic, the peace and welfare of which are highly dependent on the position of foreign players.

Pashinyan overtly overlooks the fact that President of Russia Vladimir Putin and former President of Armenia Robert Kocharyan have had friendly ties for years, and those ties won’t be impacted by certain events taking place in Armenia.

It is necessary to recall another action that the new Armenian government took without thinking twice. In June, Russia’s Ambassador to Armenia Sergey Kopirkin met with Kocharyan based on the norms of diplomacy. Nevertheless, the Ministry of Foreign Affairs caused uproar and, without any reason, viewed the meeting as interference in the country’s domestic affairs.

Kocharyan refers to the actions of Armenia’s Maidan regime as political persecution against him and his family. The former president is certain that Prime Minister Pashinyan’s crazy aspirations to jail him are explained by the fact that, since Pashinyan is the main organizer of the events that took place on March 1, 2008, he is trying to do everything he can to come out clean, and he is ready to sacrifice the political and economic stability of Armenia for his personal revenge.

Pashinyan’s actions show that the absence of law, as a result of which former President Kocharyan is obscenely imprisoned, is demonstrative. The new Prime Minister likes to exert pressure and intimidate political opponents so much that those unlawful actions will only be welcomed later.