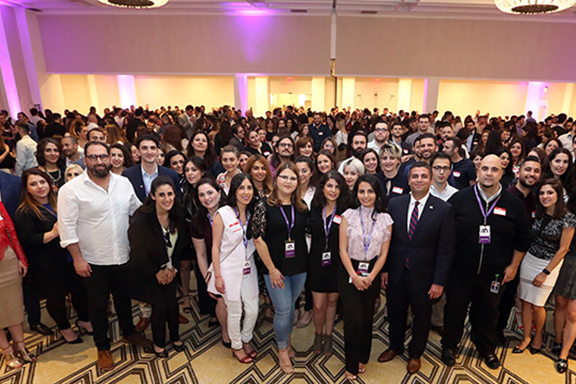 GLENDALE—More than 700 young professionals attended the Armenian Young Professionals Summer Mixer benefiting the Armenian American Museum on June 20. The highly anticipated event was held in the International Ballroom of the Hilton Pasadena.

“Thank you to the hundreds of young professionals who have joined us this evening to support the Armenian American Museum,” stated Philip Hovanessian of the Armenian Professional Network Los Angeles Chapter as he welcomed the capacity crowd on behalf of the organizations co-hosting the event.

Proceeds from the event benefited the Armenian American Museum’s Groundbreaking Campaign. The landmark center is slated to begin construction in 2020 and will be home to a Permanent Armenian Exhibition, Traveling Multicultural Exhibitions, Performing Arts Theater, Learning Center, Demonstration Kitchen, and more. The City of Glendale, home to one of the largest Armenian Diaspora communities, has dedicated premier land for the historic project in downtown Central Park.

“We are grateful for the community organizations who have come together in common cause to support the vision of the Armenian American Museum,” stated museum Executive Director Shant Sahakian. “The museum represents a historic opportunity to build a landmark center that will serve generations to come and the unprecedented turnout of young professionals is a strong testament of the legacy project’s significance for our future.”

AGBU Young Professionals of Los Angeles is part of a growing network of groups and supporters around the world who preserve and promote the Armenian identity and heritage for young Armenians between the ages of 22 to 40.

ANCA Professional Network is an association that connects thousands of Armenian American professionals and develops the next generation of leaders through social, educational, and community engagement programs.

Armenian Professional Society was formed for the advancement of education and fellowship among Armenians. APS has supported over 300 students of Armenian descent in the United States by granting scholarships to graduate students in a variety of fields.

Birthright Armenia provides work, study, and volunteer experiences with the belief that it is every Armenian’s birthright to not only see Armenia, but also experience their homeland via an enriching, hands-on, life-changing experience.

Nerouj was founded by the leadership of the Western Diocese of the Armenian Church of North America to lead the Armenian youth through education, support, and mentorship while strengthening our heritage through inner spirituality and morality.