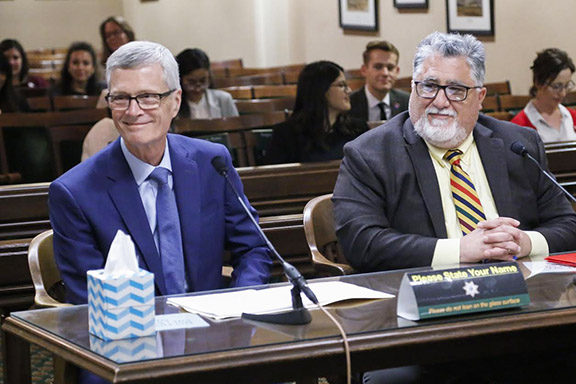 SACRAMENTO–California State Senate bill 568, authored by Senator Anthony J. Portantino passed the Assembly Higher Education Committee on Tuesday. Glendale Community College’s Superintendent and President David Viar flew to Sacramento to offer testimony in support of the bill. SB 568 would help the college offset revenue losses associated with closing on April 24. This date is important worldwide to the Armenian Community as it commemorates the Armenian Genocide.

“When I was first approached by several GCC Board Members with this unfair situation, I promised that I would do my best to correct it. GCC should not be penalized by California for closing on April 24. It is my hope that SB 568 will pass the legislature, garner the Governor’s signature, and change state law to allow GCC the same flexibility that education code gives to the GUSD,” commented Senator Portantino.

Senator Portantino, who has a long and positive relationship with the Armenian American Community and Glendale Community College, has participated in negotiations with the Chancellor’s Office for the last two years to solve this issue. SB 568 is the culmination of those discussions. Under current law, K – 12 school districts like the GUSD have the ability to close and not lose funding. Currently, community colleges do not have the same flexibility, causing GCC the loss of an estimated $500,000 for closing on April 24.

“As educators, we teach history to ensure tragedies like the Armenian Genocide never happen again. The value of our college being able to declare a Day of Remembrance is an important part of that education beyond the classroom. We appreciate Senator Portantino’ s leadership in designing a solution that allows our students to participate in remembering the past without loss of state funding to the college as our students pursue their educational goals,” stated GCC President, Viar.