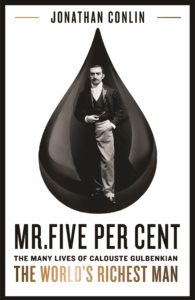 Mr Five Per Cent: The Many Lives of Calouste Gulbenkian, the World’s Richest Man
Jonathan Conlin
Profile Books, 2019
416 pp.
$24.31 hardcover
As the title suggests, there is more than one Calouste Gulbenkian portrayed in this comprehensive biography by Jonathan Conlin. Two in particular stand out: Calouste the indefatigable man of business and Calouste the Armenian, who belongs to everywhere and to nowhere. For both and more, Conlin has put together a revelatory piece of writing, having gained access to the archives at the Calouste Gulbenkian Foundation in Lisbon, Portugal, among a broad variety of other sources. Combined with his adept skills as a historian and storyteller, Conlin’s work makes for engaging reading. (Some disclosure: I had the privilege and pleasure of assisting with archival research for this book.)
As far as the first Calouste goes, this book offers a detailed account of the life and efforts of a remarkable and influential man whose actions informed key aspects of the world’s economy in the 20th century. The development of the oil industry and the financial practices and networks associated with it owe a great deal to Gulbenkian, as does the shaping of commerce between the Western world’s powers and other regions at a time when European colonial empires were being challenged by a rising United States and an upstart Soviet Union.
Among the takeaways that Conlin uncovers and shares are insights into the too-close connections between politics and business and how areas of the nascent USSR’s trade with the non-communist world were cobbled together. This is not a rundown for the faint-hearted. It is easy to feel lost and overwhelmed among a whole slew of names of individuals, banks and companies ranging from shell corporations to the corporation Shell.
The second Calouste Gulbenkian is more compelling in many ways – as much as one gets to read and know about him, that is. Calouste was a reclusive man. He was also a product of times and places that avoid neat categorizations. Needless to say, he lived through tumultuous eras. For all readers keen on seeing an Armenian face genocide and overcome adversity to end up the richest man in the world, this book will be a disappointment. The Gulbenkians were already wealthy in the generations before Calouste was born in 1869. His education, his lifestyle and the fact that he had left Talas, Caesarea and Constantinople long behind by 1915 make him difficult to identify with as a classical Ottoman Armenian refugee.
Though he was one, of a sort. His multifaceted and multilingual identity may seem familiar to many members of the Armenian world, but the dynamic of how he negotiated – and monetized! – being Armenian, Ottoman or “Turkish,” Persian or Iranian, British and French is doubtless and a unique life story well worth studying. Having ties to a few places may end up meaning belonging to nowhere. At the same time, it allows one to appear as a disinterested party for all sides – ideal for mediation and negotiation. A few passports (some diplomatic), a hefty bank account, the right connections and throwing one’s self into one’s work forge a different sort of identity. “I have three friends,” Gulbenkian says, “work, sun and sleep.” Tell me who your friends are, and I’ll tell you who you are, the old Russian proverb goes. Calouste’s favorite proverb was a bit more down-to-earth and apt, keeping to his family’s line: “İt ürür, kervan yürür” – “The dog barks, the caravan passes.” The man led his life with confidence through a path of his own making.
Conlin reveals many sides to that life. Calouste the man in deep, caring and abiding pursuit of art. Calouste the man who regularly and generously donates to innumerable charitable causes, Armenian and otherwise. (There is a particularly interesting section on Gulbenkian’s involvement with the AGBU.) Calouste the man who deals with and intermediates among high-ranking Ottoman, Young and new republican Turks, as well as Stalin, alongside more or less the entire gamut of political and business leaders of Europe, the Middle East and elsewhere. Calouste the Oriental family man.
In fact, the family life of the Gulbenkians makes for a most interesting look into both how the social norms of the wealthy functioned in the late Ottoman Empire and how that carried over into Europe, sometimes fitting in well, sometimes falling jerkily out of place. Again, do not expect heart-warming relationships among loving spouses, parents and children who see each other through thick and through thin. Quite the contrary. The Gulbenkian experience offers a variety of often atypical takes on what it means to belong to a family, to be loyal to a country or government, or nation, to create or to have a home.
What of the final home of Calouste Gulbenkian’s wealth and treasures? Conlin shares details on how the foundation that bore that man’s name ultimately came to be and the unlikely place where it took root. Another bit of disclosure: I have had the privilege of benefiting more than once from generous support through the Calouste Gulbenkian Foundation. Besides curiosity, then, I confess to having read Mr Five Percent with a sense of responsibility and gratitude.
Discovering Calouste Gulbenkian’s path in becoming the world’s wealthiest individual is not, however, always gratifying and – in the 21st century’s world of politics, business, financial regulations and the ecology – one may not always feel inspired to follow in his exact footsteps. At the same time, learning about what made and moved such a man and a deeper engagement with his legacy is very thought-provoking – as long as one is ready to grapple with rather inextricable questions of, among other things, identity and belonging, wealth and generosity, responsibility, family and, indeed, the Armenian experience.
Nareg Seferian