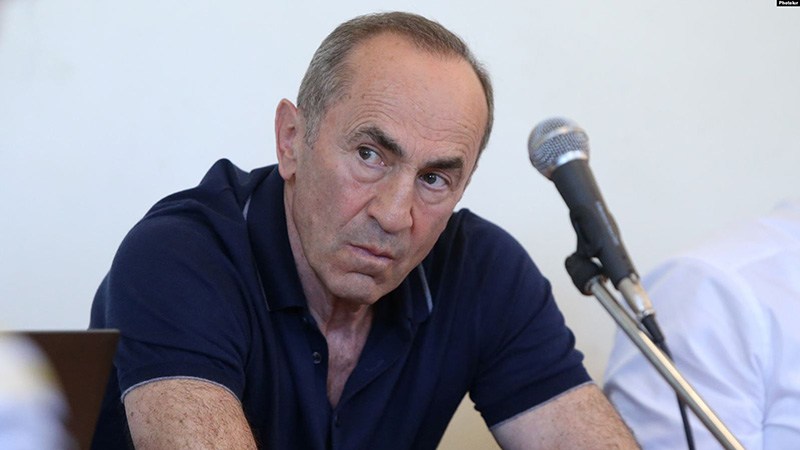 YEREVAN (RFE/RL) — Armenia’s Court of Appeals overturned on Tuesday a lower court’s May 18 decision to release former President Robert Kocharian from prison pending the outcome of his trial stemming from the 2008 post-election violence in Yerevan.

Kocharian seemed to have anticipated the decision made by a Court of Appeals judge, Armen Danielian. In a statement released earlier in the day, the ex-president’s office said he, his lawyers and family members will boycott the announcement of the decision because Danielian cut short the court hearings on June 20. The lawyers say that they were thus unable to present detailed arguments against their client’s renewed arrest.

A district court in Yerevan ordered Kocharian released from jail after receiving “personal guarantees” from Nagorno-Karabakh’s current and former president to the effect that he will not obstruct the trial if freed.

The court of first instance also decided to suspend the trial and request an important clarification from the Constitutional Court. It cited a “suspicion of discrepancy” between the Armenian constitution and coup charges brought against Kocharian.

Prosecutors appealed against both decisions denounced by many supporters of the current Armenian government. Prosecutor-General Artur Davtian personally appeared before the Court of Appeals last week to make a case for sending Kocharian back to prison.

Kocharian as well as two retired generals stand accused of illegally using Armenian army units against opposition protesters in the wake of a 2008 presidential election marred by fraud allegations. Eight protesters and two police servicemen were killed in street clashes that broke out in Yerevan on March 1, 2008. Kocharian handed over power to his preferred successor and official election winner, Serzh Sarkisian, after completing his second presidential term in April 2008.

Earlier this year, Kocharian was also charged with bribe-taking. He denies all accusations leveled against him as politically motivated.

In a televised interview aired late on Monday, the ex-president again blamed Prime Minister Nikol Pashinian for the 2008 bloodshed and the criminal charges brought against him.

Pashinyan was one of the key speakers during February-March 2008 anti-government protests organized by Levon Ter-Petrosian, the main opposition presidential candidate. He has denied any political motives behind the prosecution of Kocharian and other former officials.