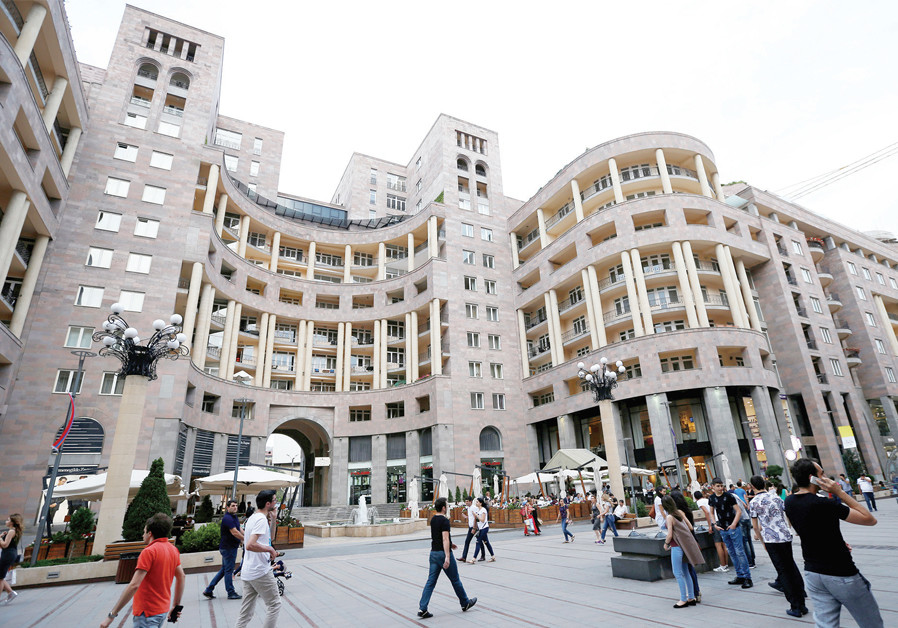 But facts on the ground occasionally dictate otherwise – particularly in Armenia, one of the world’s oldest Christian nations.

The scourge that famed historian Robert Wistrich once described as “the longest hatred” is undergoing a frightening contemporary resurgence. From synagogue shootings in Pittsburgh and Poway, which grabbed global headlines, to lesser-known but near daily reports of vandalism, threats and violence, the 21st-century revival of antisemitism is unmistakable.

While most attention – justifiably so – focuses on growing antisemitism among the far Right, far Left and Islamic extremists, one traditional source of Jew-hatred has been largely overlooked: Christian antisemitism.

This past week’s report that an antisemitic attack was carried out earlier in June by 60 Armenian Church students on the eve of the Shavuot holiday in Jerusalem brings to light the centuries-old trend of Christians targeting Jews, and in this case the ongoing antisemitism in Armenia. Beyond that, the incident represents a cautionary tale for both Jewish leaders and the Israeli government as they seek to build global partnerships and alliances.

With major reforms in the Catholic Church (such as Vatican II) that ended centuries of antisemitic teachings, as well as the burgeoning movement of Christian Zionism found especially within the Evangelical community, it is easy to presume that Christian antisemitism is on the wane.

On a parallel track, given the threat of Islamic terrorism and the tensions of the Arab-Israeli conflict, it is usually a safe assumption that Israel will have stronger alliances with Christian-majority nations than Muslim-majority states.

But facts on the ground occasionally dictate otherwise – particularly in Armenia, one of the world’s oldest Christian nations.

There is abundant evidence of Armenian society displaying systemic antisemitism, including high-profile research conducted in recent years. In 2018, a Pew Research Center survey found that 32% of Armenians would not accept Jews as fellow citizens. The Anti-Defamation League’s (ADL) latest “Global 100” study, meanwhile, found that a majority of Armenians believe a variety of antisemitic stereotypes are “probably true.”

Israel’s deep relationship with Azerbaijan is no accident. Azerbaijan has no history of antisemitism (and no contemporary antisemitism, for that matter), a prosperous Jewish community of its own for over two millennia, and a thriving immigrant community in Israel.

HOW IS it possible that a Muslim nation has warm ties with the world’s only Jewish state, while a Christian country like Armenia is plagued by antisemitism and frosty relations with Israel?

First, one must consider the broader environment of religious tolerance in Azerbaijan, which is rooted in proper separation of church and state. In a Gallup International/WI Network of Market Research poll, Azerbaijan ranked as one of the most secular nations among 65 countries surveyed. Azerbaijan’s population is 97% Muslim, but the country’s constitution affirms the country as a secular state. The state education system is secular. It is a tremendous statement in support of religious freedom for an overwhelmingly Muslim population to avoid designating any official state religion.

Contrast that with Armenia, where the Armenian Apostolic Church holds significant influence. In the fourth century CE, the Kingdom of Armenia became one of the first states to officially adopt Christianity. The sway that the church holds over the Armenian state continues to this day. The Armenian Apostolic Church holds official status as the national church, despite the fact that Armenia’s Law on Freedom of Conscience establishes the separation of church and state. As such, Armenia is not a purely secular state like Azerbaijan.

At the same time, there is ongoing concern over vestiges of ancient church-based antisemitism, particularly in Eastern Orthodox churches. The ADL has called on these churches to remove ancient antisemitic passages in their liturgy and to end the teaching of replacement theology.

Given the central role the Armenian Church still plays in the country, it is perhaps no surprise to see Armenia whitewashing Holocaust history on the state level, Armenian media showing consistently anti-Israel and antisemitic tendencies, and most recently the antisemitic attack by Armenian Church students in Jerusalem. Without authentic separation of church and state, religiously motivated bias and hate have greater potential to fester among a country’s population.

The contrast with Muslim-majority, yet secular Azerbaijan could not be starker. Azerbaijan has consistently stood up against antisemitism, maintains close defense and economic ties with Israel, and is a bulwark against the threat of Iran.

Jewish and Israeli leaders must keep this historic and present-day context in mind. Don’t judge a nation by its predominant religion. Although conventional wisdom on sources of religious hatred often holds to form, allies can still be found in unexpected places.

The writer is an author and journalist. His memoir and social critique, The Egotist, has been translated into five languages. His work has been featured in The Daily Caller, MSN and The Huffington Post. His book of articles, Tikkunim (Corrections), was released in January 2018.