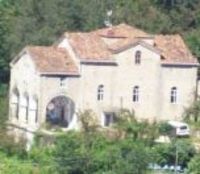 Historical Seminary and Church in Trabzon Abandoned to Decay

İshak Üçüncü has applied to the Ministry of Culture and Tourism and requested that the historical seminary and church in Sürmene in Turkey’s Black Sea province of Trabzon be taken under protection by the ministry.

These remarks have been uttered by İshak Üçüncü from Sürmene in Turkey’s Black Sea province of Trabzon. As for the buildings he has referred to, the first one is the Seminary in Cida Village of Sürmene and the second one is the historical church in Dirlik Village.

Underlining that both buildings that need to be protected have been abandoned to decay, İshak Üçünü has submitted an online petition to the Ministry of Culture and Tourism and requested that the historical buildings be placed under Ministry’s protection.

Efforts of villagers have remained fruitless

Some highlights from Üçüncü’s petition to the Ministry are as follows:

“The Theological Seminary, which was built by the Rums (Greeks) living in Sürmene, was used as Dirlik Village Primary School and its lodging in the early Republican period. After eight years of mobile teaching, the school is now unattended and has been left to its fate.

“Even though the locals made some initiatives to use it as a hotel, a workshop on local products or Surmene Museum, the path could in no way be overcome and the original stone stairs behind this two-storey high ceiling building were demolished afterwards.”

‘Seminary awaits to be saved’

“The Seminary, which is one of the several buildings left to decay in Cida Village of Sürmene, also awaits to be saved”, Üçüncü indicated further in his petition and added:

“The people of Dirlik Village want the historical churches, which were constructed by the Rums in their village, to be restored and reintroduced to belief tourism. The church has an important place in the village.

“While some churches have collapsed with the passing of years and environmental conditions, some of them have been turned into mosques.

‘They should be opened to belief tourism’

“They could not be used as mosques by Muslims. We want the historical Greek Church to be restored to its original form and opened to belief tourism. We are sorry for seeing the church in this condition. We want the renovation works to start as soon as possible. We want it to be reintroduced to tourism.

“Citizens should come and visit our village. We, as the residents of this village, want this church left to us by Rums to be restored and opened to visit.” (EMK/SD)