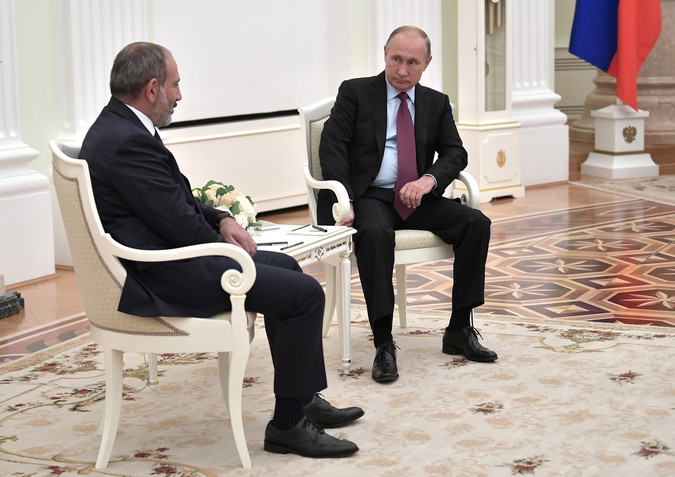 Attempts by Armenia to normalize relations with Russia have not yet yielded any positive results. Yerevan is taking various steps in order to curry favor with Moscow. Nevertheless, Armenian Prime Minister Nikol Pashinyan does not give up on West including the United States. Yerevan’s attempts to create a balance between the Kremlin and the West have not succeeded. On the contrary, when Pashinyan tries to show himself close to Moscow, he is getting further away from West and vice versa. Due to the lack of confidence in the government, the poles do not exclude chances that the Armenian government will betray them in the future. Let’s take a look at some of the news that will confirm this.

The US has once again expressed its indignation over the Armenian government sending military aid to Syria. Washington regarded this act as helping Bashar al-Assad. That is why meetings of Armenia’s Foreign Minister Zohrab Mnatsakanyan in United States Department of State and secretary of Armenia’s National Security council Armen Grigoryan with U.S. National Security Advisor John Bolton have not taken place. Recently, Armenia by sending the next aid to Syria has tried to please Russia. However, the meeting of Russian Ambassador to Armenia Sergey Kopyrkin with Robert Kocharyan, a former president of Armenia accused of overturning the constitutional system in 2008, increased tension. The diplomat called on the Ministry of Foreign Affairs and he was explained that Russia does not interfere in Armenia’s internal affairs. Nikol Pashinyan did not comment on this issue.

Parliament Speaker Ararat Mirzoyan said he did not welcome the meeting of the Russian diplomat with Kocharyan. On June 18, Russian Security Council Secretary Nikolai Patrushev met with his Armenian counterpart Armen Grigoryan during the 10th international conference on security issues in Ufa. The parties stressed the importance of dynamic development of partnership between the two countries. Armen Grigoryan spoke about the role of the Russian community in Armenia and the Armenian community in Russia in the development of relations between the two countries. Patrushev thanked Armenia for sending aid to Syria. They also discussed the issue of settlement of the conflict in the occupied Nagorno-Karabakh region of Azerbaijan. The parties stated that the conflict was not an alternative to peaceful settlement.

As can be seen, the Russian side did not hold a separate meeting with Armen Grigoryan. This is also another message of Moscow to Yerevan. That is, any Russian official does not have a single or private meeting with Armenian officials of all levels. This tradition continued during a meeting between Russian President Vladimir Putin and Nikol Pashinyan within the framework of the St. Petersburg International Economic Forum. The meeting lasted for 30 minutes. From the statement made by Pashinyan, it can be seen that they did not solve a serious problem at that meeting. The parties discussed the price of natural gas and the situation with military cooperation between Armenia and Russia. In other words, Putin met with Pashinyan in accordance with the protocol. On the background of strained relations with Russia Pashinyan advised Ukraine’s new President Vladimir Zelensky to establish relations with his Russian counterpart.

However, Armenia continues propaganda against Russia. The 102nd military base in Armenia is the largest tool of pressure against Moscow in the hands of Yerevan. There are frequent calls in the country about the withdrawal of this military base from Armenia. It is possible to suppose that the West ordered Russia’s withdrawal from Armenia. Adoption of amendments to the US Congress on additional financial assistance to Armenia confirms that. Notably, during his meeting with US Ambassador to Armenia Lynne Tracy, Nikol Pashinyan asked Washington to increase financial aid. Under the new amendment, the US will provide Armenia with additional $ 40 million. It is likely that this funds will be allocated to democratic reforms in Armenia. There are reports that Soros Foundation has helped Pashinyan and other sociopolitical forces supporting him. Meanwhile, Pashinyan also admitted that there is mistrust in his team in Russia: “I want to speak clearly. The Russian elite has problems with what happened in Armenia. They have been in the political opposition in the past, representing civil society. These guys do not want to cooperate with the former authorities. The civil society sector has been funded by international organizations that are against Russia. For this reason, they have no confidence in us. But I am sure that this will be solved in time “.

By the way, Nikol Pashinyan is trying to re-establish relations with Russian-Armenian businessmen. Recently, he met with Russian-Armenian businessman Samvel Karapetyan. It should be noted that Karapetyan provides all kinds of assistance to the Armenians in the occupied Karabakh region of Azerbaijan. Pashinyan is taking steps to gain the confidence of Armenian businessmen in Russia. However, Armenian businessmen are well aware that disobedience to Moscow and establishing independent relations with Armenia will have consequences. Therefore, the Pashinyan government has faced serious challenges in this area. In other words, Armenia has long been missing foreign investment. According to what happened, it is possible to conclude that if Nikol Pashinyan’s government disobeys, Moscow will give consent to serious actions against them.

Armenian police have recently detained 9 young people for writing the slogan #SutNikol (fake Nikol) on the streets of Yerevan. They said that this action was the beginning.

Finally, the issue of Kocharyan can be considered as a Litmus of the power of the Russian-Armenian relations and the power of the Pashinyan government. Moscow does not hand over those who fled to Russia because of being persecuted by the authorities in Armenia to Yerevan. Former Chief Compulsory Officer of Judicial Acts of Armenia Mihran Poghosyan is in the Russian capital. He has been charged with embezzlement and abuse of official authority. Russia does not hand him over to official Yerevan because it does not believe or trust judicial system in Armenia. From the relations between the two countries, Russia seems to use the issue of withdrawal of the Armenian armed forces from the occupied territories of Azerbaijan as a pressure on official Yerevan.The Kremlin wants Armenians to understand that it is Armenia’s owner. Karabakh was occupied with its help and support. It has the main role in the return of lands to Azerbaijan. Nikol Pashinyan’s recent statement that “the Karabakh talks do not last from where Serzh Sargsyan stands,” confirms that Moscow and Yerevan have a disagreement on this issue.

Even though Russian-Armenian billionaire Samvel Karapetyan has been squeezed out of the Armenian market or there is no room for his activity there, Moscow continues to use that person in Karabakh. It is a fact that Samvel Karapetyan’s help to many families in Karabakh is another proof of that.

Thus, what has happened shows that Armenia and Russia will no longer be sincere towards one another. This will show itself in a new national security strategy. It was noted that this document was adopted in January 2007 but has not undergone any changes over the past 12 years. A new working group has been set up under the order of Nikol Pashinyan. Although the date of the completion of the document has not been clarified yet, it is expected to be ready by the end of 2019.

If this continues, Armenia may withdraw from Russia and Russia from the list of strategic states. Conditions are created for this.