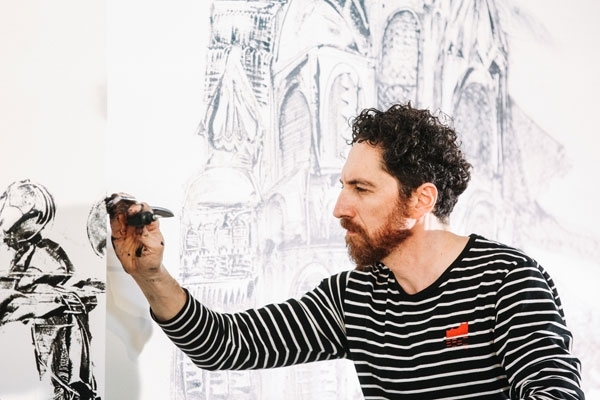 Syrian-Armenian artist Kevork Mourad will create a six-metre hanging sculpture live in situ as part of his upcoming exhibition, Seeing Through Babel, the London Resident reports.

In the Old Testament story of Babel, mankind is punished for attempting to construct a tower to heaven, an act of hubris that led God to create multiple languages to prevent such collusions happening again.

For this exhibition – running from 1 July until 15 August 2019, in partnership with the Aga Khan Museum in Toronto – Mourad explores the story of Babel, using visual imagery as a means to connect people across the language divide.

Kevork Mourad will create a six-metre hanging sculpture in situ before the public prior to the exhibition launch.

The work, which uses the artist’s trademark techniques – monotypes and drawing onto the surface of the work – is designed to allow visitors to walk in and around it, allowing closer consideration of its themes.

Through visual language, his work ‘can connect people who speak different languages and come from different cultural backgrounds,’ he says.