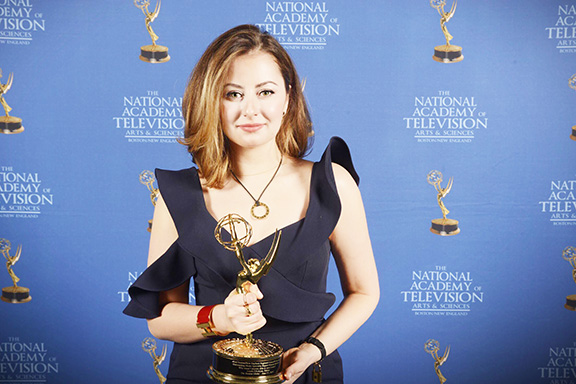 BOSTON–Anush Elbakyan has received her third New England EMMY Award in the “Outstanding News Specialty Report Human Interest” category. Elbakyan won the award for “Why Wasn’t Anyone Able To Save Laura?” as its editor. The video tells the story of a young woman who went to a local hospital with asthma attack but didn’t get any help and died in front of the hospital.

Elbakyan received her second EMMY Award in 2017 for “Spotlight Investigation: Private Schools, Painful Secrets” in the “Outstanding Societal Concerns Program/Special” category. The documentary tells the story of hundreds of students who were sexually abused by staffers at New England boarding schools, emerging from decades of silence.

In 2016 Elbakyan received Emmy Award in the “Outstanding News Report – Serious Feature” category for a documentary short, “A Day in Life of Leo” about a boy who was badly burned by fire, and has been transformed by his devoted caregiver.

Additionally, Elbakyan was chosen as one of 28 women globally for the 2018 class of Poynter Institute’s Leadership Academy for Women in Digital Media.Elbakyan had participated in Boston Globe’s coverage of the Boston marathon bombings and their aftermath, which won a Pulitzer Prize and Online News Association’s Online Journalism Award for Breaking News Coverage.

Anush Elbakyan is an Emmy award-winning producer and multimedia journalist. Elbakyan is the Video Director and the Senior Video Editor for the Boston Globe. Elbakyan oversees the production and distribution of the Globe’s original video content, while also managing video business operations and leading the digital video strategy. Elbakyan manages a team of video producers and coordinates the daily video news operation. She launched and served as executive producer for the political digital video series “Ground Game,” “Live Political Happy Hour” and the food series “Smart Cooks.”

New England Emmy Awards are a division of the National Academy of Television Arts and Sciences, the premier and most recognized non‐profit organization dedicated to the advancement of excellence in television. Every year the Academy awards the Emmy Award, the most prestigious, peer‐judged honor in television, for outstanding creative achievement.