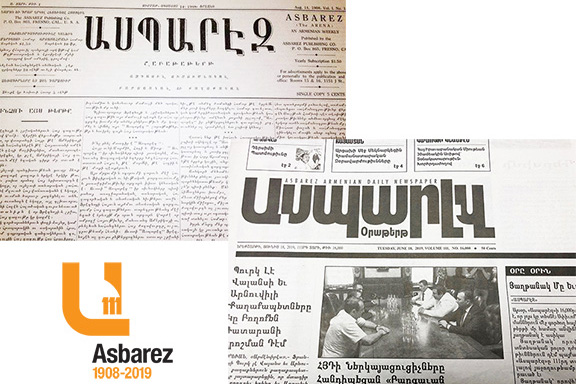 Another Milestone for Asbarez

Tuesday’s print edition of Asbarez is the newspaper’s 16,000th issue that has rolled off the presses. It is indeed a milestone, or as our Armenian edition dubbed a victory, given the challenges the Armenian press is confronting in the Diaspora.

It is also a milestone—or victory—given the general economic and financial hardships in the newspaper industry, and the unique predicament that we face every day in producing our publication, be that its print or online editions.

On the eve of our 111th anniversary, we are proud that we have been able to maintain and advance the commitment with which Asbarez rolled its first issue off the presses on August 14, 1908.

Asbarez’s mission to provide the community with an arena for news, information, discussion and discourse is a simple and straightforward one; one that we have been able to foster and advance with changing times and technological advances. Today, Asbarez is the only bilingual Armenian daily publication in the United States (if not the entirety of the Diaspora and even in Armenia). We take our mission seriously, for we believe that an informed public is a catalyst for change and advancement.

Here at Asbarez, we are truly humbled to be able to continue the charge and the trajectory put forth by our trailblazing founders, who more than a century ago set the tone for serving the community by informing. We are committed to continuing this tradition and by overcoming all obstacles and working on the next 16,000 or more issues.

To enumerate the significant and historic events Asbarez has covered in the past 111 years, and in its 16,000 issues, would fill columns upon columns. But to say that Asbarez has played a critical role in the development and advancement of our community would not be an understatement, nor would we be patting ourselves on the back.

It is abundantly clear to us that Asbarez would not have survived for more than a century had it not been for our engaged readers, who generation after generation have made Asabrez an important part of their lives and have taken the journey in advancing the Armenian Cause.

We have opted to use the publication of our 16,000th issue to inaugurate our fundraising campaign for our 111th anniversary. We are honored to serve you—our readers—and invite you to celebrate these milestones with us.