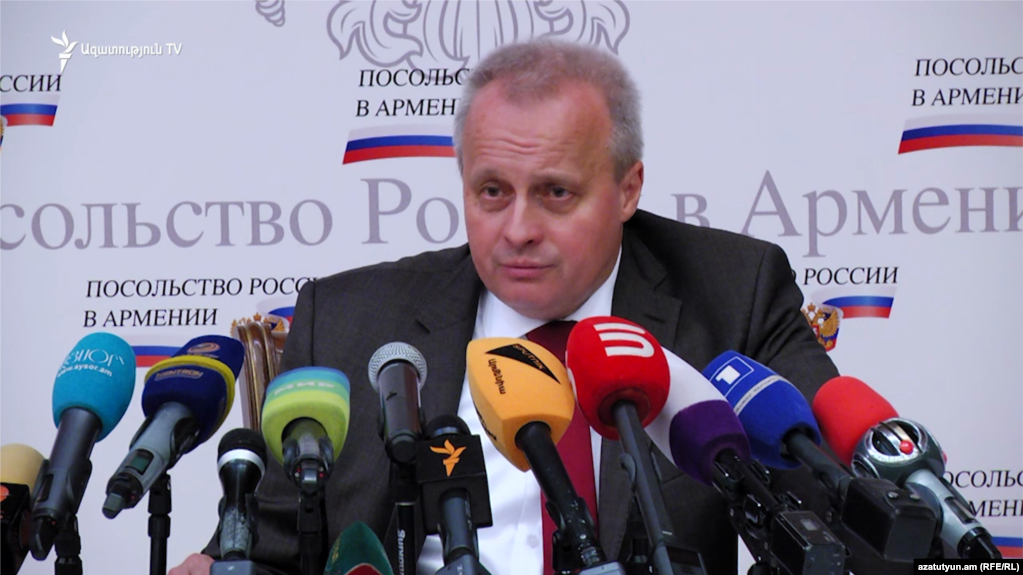 YEREVAN (RFE/RL) — Russia’s ambassador to Armenia was summoned to the Foreign Ministry in Yerevan last week after meeting with the indicted former President Robert Kocharian, a senior Armenian lawmaker revealed on Monday.

Ambassador Sergey Kopyrkin and Kocharian met on Thursday nearly one month after the latter was controversially released from prison pending the outcome of his trial. The ex-president was charged with overthrowing the constitutional order in 2008 shortly after last year’s Armenian “velvet revolution.” He denies the accusations as politically motivated.

The Russian Embassy in Yerevan said Kopyrkin spoke to Kocharian “within the framework of his regular meetings with representatives of social-political and business circles” of Armenia.

Parliament speaker Ararat Mirzoyan dismissed this explanation on Sunday when he spoke at a congress of the ruling Civil Contract party. Mirzoyan said he does “not welcome” the meeting because Kocharian is facing coup charges and cannot be considered a politician in these circumstances.

“Look, newspapers write that Kocharian is backed by Russia’s [ruling] elite,” Igityan told RFE/RL’s Armenian service. “Kocharian’s entourage is spreading such claims. In this context, the ambassador’s meeting was ludicrous to say the least.”

Deputy Foreign Minister Grigor Hovannisyan told the National assembly that the Russian envoy did not break the diplomatic protocol.

“The ambassador did not do anything wrong within the bounds of the diplomatic protocol and norms,” said Hovannisyan. “That [meeting] cannot be deemed condemnable or be the subject of a special examination by our ministry.”

Rubinyan announced later in the day that he has discussed the matter with Foreign Minister Zohrab Mnatsakanian. “The minister informed me that in fact the Russian ambassador was invited on Friday to the Foreign Ministry where a conversation took place with the ambassador in the context of not interfering in Armenia’s internal affairs,” he wrote on Facebook.

“Deputy Minister Hovannisyan did not speak about this at the committee meeting because at that point he did not have a permission to publicize the information,” added the lawmaker.

Russian Foreign Minister Sergey Lavrov denounced the prosecution of Kocharian as well as other former Armenian officials shortly after the ex-president was first arrested in July 2018.