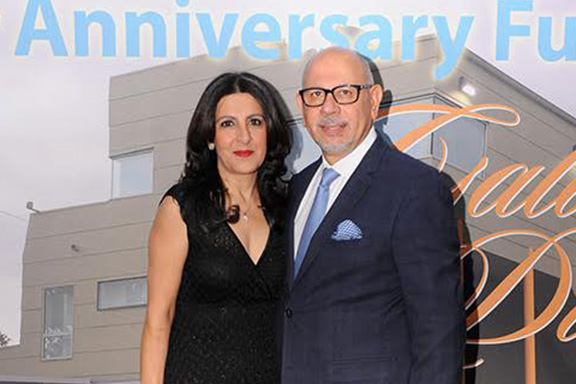 Active Armenian community members, Garo and Sosse Eshgian will serve as Honorary Presidents of Homenetmen’s 44th Navasartian Games. In an effort to better understand, and fully present, their dedication and work for the community at large, Maro Kechichian recently met with the Eshgians.

Garo Eshgian was born in the Armenian-populated region of Bourdj Hammoud, in Lebanon, to a patriotic family. He is the second child of Misak and Ovsanna Eshgian. His elementary education was received at a local school, and he attended the Levon and Sophia Hagopian Armenian College for his secondary education. Later, he experienced the civil war in Lebanon for more than 11 years. Being wise, self-sacrificing, and trustworthy, Eshgian was entrusted with important roles and responsibilities. As a result of his diligence and hard work, he achieved many successes in his life and shared in those successes with his family and close networks.

In 1986, he relocated to the United States and settled in Glendale, California where he pursued a profession in the industry of selling nuts and, simultaneously, in real estate.

In 1988, he married Sosse Garabedian, who he had met in 1980 through the AYF in Lebanon. The couple have two children, Nare and Koko, who follow their parents’ example in immersing themselves in an Armenian environment. Both children graduated from Chamlian Armenian School, and later from La Crescenta High School. Currently, Nare is pursuing her education in the field of dentistry in Las Vegas and Koko follows in his father’s footsteps.

As a result of his skills, leadership qualities, and dedication, Garo Eshgian has been entrusted with numerous leadership roles. He has served as a member of the ARF Aharonian Gomideh, a member of the Board of Trustees of St. Mary’s Armenian Apostolic Church, including its chairperson for several years, and a member of the Western Prelacy Executive Council, which he currently serves as chairperson. He has also exemplified his commitment by serving on a number of ARF centralized committees.

The most difficult days he has endured have included the deaths of his parents and the sudden death of his only brother, Sako, in 2006. As a means for their legacies to live on, Eshgian has made donations in memory of his parents toward the renovation of the Cilicia Museum, the clergy room at the St. Mary’s Armenian Apostolic Church in Glendale, as well as the conference room of Asbarez, in memory of his brother. By having faith, and believing, in Vicar General Bishop Torkom Donoyan, Eshgian became his Episcopal Ordination Godfather, traveling from the United States to Lebanon for this purpose.

The Eshgian’s have always demonstrated a positive outlook and brought their tremendous moral and financial support to educational institutions, community organizations, students, and youth.

Sosse Garabedian was born in Qamishli, Syria, to a family filled with Armenian spirit. She is the sixth of seven children born to Hovhannes and Vartuhi Garabedian. She attended the local Yeprad School. In 1971, she relocated to Lebanon with her family and settled in the Amanos district, where she attended and graduated from the Cilicia School. She became a member of the Armenian Youth Federation in Lebanon and held various positions as a result of her responsible nature and leadership qualities. She served as an executive member of the local chapter, as well as a leader of the junior chapters in Amanos and Rawda. She was a member of the Korani dance group in Bourj Hammoud, and joined the ranks of the Armenian Revolutionary Federation in 1982. For years, she worked as a treasurer in the national council and as a secretary for a few years for the famous radio Voice of Van in Lebanon.

In 1988, she became engaged to Garo Eshgian and relocated to the United States during the same year they were married. She continued her organizational life in the United States and served on the ARF La Crescenta Zavarian and Glendale Aharonian Gomidehs. She has been an active member of the Tufenkian Preschool’s parent committee, and also joined the AYSO soccer team’s parent committee as a result of, her son, Koko’s athleticism. She also became involved with the Homenetmen Crescenta Valley Shant Chapter where her son was an athlete. Through her modesty, diligence, and mild nature, she has captivated the love and respect of those surrounding her. She holds dear to her heart all organizations that benefit the education and upbringing of youth, the welfare of the Armenian people, and strengthening of the homeland. “Homenetmen is one of the organizations for which we have accepted the role of Honorary Presidents of its largest annual event, the Navasartian Games,” she stated.

Reflecting on Homenetmen, Garo Eshgian affirmed, “I have always felt proud of my past through Homenetmen. Through its vast programs, and especially the Navasartian Games, the organization continues to create great enthusiasm among Armenian youth. It has also offered the opportunity for families to be created. I have no doubt that, following Armenia’s independence, Homenetmen took on a great role in the national life of Armenian youth through its scouting ranks and camps. I am confident that the organization will continue to rise to greater heights and will preserve our national values.”

Adding to the subject of becoming the Honorary Presidents of the 44th Navasartian Games, Eshgian continued, “Naturally, my past in Homenetmen has played a great role in assuming this responsibility. I have learned a great deal from this organization. At this time, with my current capabilities, I will do the most to show my support for this dear organization, whether financially or morally.” In agreement with her husband’s sentiments, Sosse Eshgian expressed hope that Homenetmen will continue its mission of serving the Armenian people and nation while staying true to its, “Elevate Yourself and Others with You,” motto.

The Homenetmen Regional Executive congratulates Garo and Sosse Eshgian, and thanks them for their generosity and support as they continue to serve as exemplary community members.