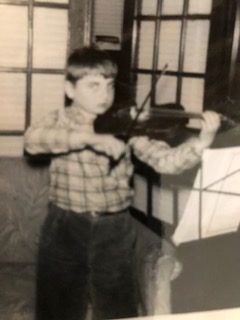 The Armenian Brethren and the Turkish Language

I was ten years old, and I had been hearing sermons on sin and redemption for seven years. The sermons were delivered from behind a pulpit by my uncle Vartan. The pulpit was neither attached to an ascending ladder, curved and pregnant with the promise of levitating heavenward, nor was it attached to a stairwell curling downward with the threat of judgment. Our pulpit was bound to the earth at the front of a stage, three feet above the floor, a general in command of an army of pews. The pulpit stood there in its summer sweat and in its winter freeze.
We, the bodies of that congregation of brethren from halfway across the world, now within a picnic ride from Plymouth, sat there, not as Plymouth Brethren, but as Armenian Brethren, smelling of garlic, weeping in silence, and singing from the heart. The hearth of our home was from across the Atlantic, through the straits of Gibraltar, even further, beyond the colossus at Rhodes, where the towns and villages lay, by the way of the ‘ten thousand’, and before that, the wonder of Alexander, as he trooped his way through western Asia, on his journey to the land of rupees and maharajahs.
We were neither cowered by that history, nor emboldened. It was but another event under the reflection of the gaze of the ark, as her glance bore down upon us from her confinement in snow and ice, in the solitude of her wood and timber. That was our pale, the knowledge that the ark was above us, and everything below was a stage on which was written the cries of Noah’s children.
From the pulpit, the sermons coursed their way to my soul through the filter of a translation. As they were preached in Turkish, a language unknown to me, although surrounding me, I received the truth, second hand, in the car ride home, and during the lunch that consumed half the afternoon, whose humor and intensity satisfied the mist of our history, and sustained our cord to the ‘old country.’
I learned, during these bouts with Sunday afternoon, stories of the Bible. My favorite was David and Goliath, if only because David’s weapon of choice was my father’s in his battle with the Kurdish boys in the mountains surrounding the city of Marash, his birthplace. Dad fought them when he was younger than the age David was when he fought Goliath. Dad was small, the weapon even smaller, yet everything grew large in my eyes which beheld the wonder of my father waging war at the very same age I was.
These stories provided life to the hours and Sundays spent in church listening to sermons in a language that was incomprehensible. I learned, also, how hard life could be, not from listening to the sermons, but, from sitting in those pews, which unlike the God about which I was being taught, were unforgiving. The oak benches, their back set at a puritan angle of discomfort, were hot and sticky in summer, cold and condemning in winter.
From all these Sundays and stories, I learned that the life of the Christian was a heroic one. I found myself, weekly, saving the congregation from interlopers, bandits, thieves and thugs. Jumping down from the balcony in a surprise attack, and overwhelming all with my derring-do, was normal fare for me on a Sunday morning and only fitting to the fulmination against evil coming from the front of the sanctuary.
From the pulpit emanated always the sound of love. Because the sermons were in Turkish, the sound of the Turkish language was inseparable from the sound of love. In that language, also, I experienced the smells of mother’s cooking, the taste of her fare, the laughter of our guests, and the frustration and comedy of backgammon. That language was a mountain stream, capturing the sun by day, and the moon by night. It touched everything in its path, cooling the sun and warming the moon and sending the single note of its cascade around one stone into a serenade over thousands. The forest, nearby, rung with the sound of its serenade, and the darkness at noon, in the depth of the forest, was lessened at its fringe, by the reflection of the sun on the maiden face of the stream.
Like all of life, the stream carried at its waistband, ready for adornment, the mask of death. I learned at an early age why this language was hidden from me, why it was not spoken to me, why all those around me shrunk back from teaching it to me. I learned at the age of ten that it was the language of the murderers of our race. It was a language that embraced me, but impaled the history of my people. It was a language whose origin and ownership was of and by a people who hated to death my ancestors and their progeny, and yet a language that provided a bridge for the establishment of a new life on a new continent. That was the brute of it all, the marriage of good and evil in the melody of a language.
Yet, it was from the English translation of this language of a people of the Koran, that I learned the Bible. From that rough sound flowing from my uncle, who was dressed in a suit, made by his own hand, and who was whiskered by a face filled with the stones and mountains of his loss, I learned the consequence of sin, and the commitment of the God of Abraham, Isaac and Jacob, to the redemption of His people.

Notes to the Reader:
1) Presumed is the knowledge of the genocide of the Armenians, by the Turks, in 1915, where an estimated 1.5 million people, 80 percent of the Armenian population of Turkish Armenia, were exterminated.
2) Most of the Armenians arriving in this country after the First World War were survivors of that genocide. For various reasons, many spoke Turkish, exclusively.
3) The ‘ten thousand’ are the 10,000 Spartan warriors, who undertook a march of 1000 miles, back to Greece, led by their elected leader, Xenophon, an Athenian, following a defeat in upper Asia, in the fourth century, B.C. That march led them through the western reaches of Armenia. It was a march of epic proportion, unique in military history.
4) Of the many Protestant denominations, one is called the Plymouth Brethren, a conservative, fundamentalist denomination. The Armenian Brethren is an ethnic derivative of the Plymouth Brethren.
5) The remains of the ark putatively sit on the western face of Mt. Ararat, facing the western part of historic Armenia, modern day, eastern Turkey.
6) The church building, the locus of the experience described here, was constructed in 1938, and still exists, today, at its original address, in Watertown, Mass.