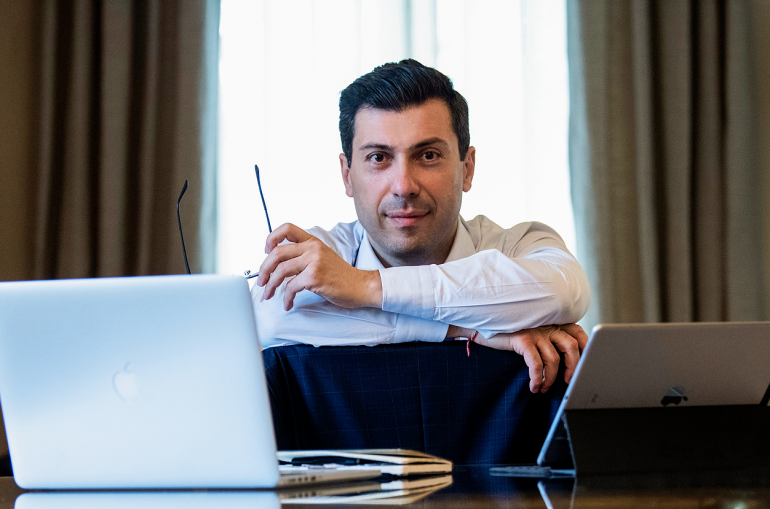 Armenia: the demand for greater accessibility to Europe: Mikayel Minasyan’s article in The Huffington Post

Mikayel Minasyan, a former Armenian ambassador to the Holy See of Vatican, Portugal and the Republic of Malta, has published the following article in The Huffington Post:

Almost 28 years after the release of the legendary “Citizen Kane” (1941) that narrated about American identity and self-awareness, in Soviet Armenia a miraculously not censored novel by young writer Hrant Matevosyan (1935-2002) was miraculously allowed for a feature film. That movie has now become classics for everyone speaking Armenian. It tells about the life in Soviet Armenia and the curtained world that had its own, unwritten rules. That’s exactly how it was titled: “We and our mountains”(1969). So, in the 1960s, as the world was being stormed by technological, civilizational and political revolutions, two shepherds in the Armenian mountains calmly discuss the number of important countries in the world and conclude: “It’s us, America and, probably, Austria”.

Besides being classics in Armenian cinematography, “We and our mountains” encapsulates the biggest fears of the new generation of Armenians: don’t be locked up in our mountains, nor be limited in our worldview and, unlike our ancestors, don’t live on vague ideas about the world. The new generation of Armenians wants to keep up with the times and be part of the modern world. The new times, gaining speed at Greenwich prime meridian, are set in Europe. This determines the authentic aspiration of Armenia and Armenians towards Europe. This is natural, reasonable, stalwart and rational choice.

Europe for us is the symbol of our ambitions and the window of our opportunities. That window was opened following the demise of the Soviet Union and up to this point has matured into the Comprehensive and Enhanced Partnership Agreement, or CEPA, which is currently in ratification stage in Member-States and which reflects all those common wishes and aspirations in greater detail.

Armenia has three priority issues: security, welfare and demography. The agenda with the European Union cross-cuts through our priority list. The continuous reforms in internal affairs and strengthening democratic institutions are preconditions for creating and empowering more vigorous safeguards for domestic security.

Providing for competitive economic environment in Armenia and better access to the solvent EU market for local producers is a window of opportunity, whereas trade facilitation is a source of prosperity for our citizens.

Notwithstanding the zigs and zags of cooling and bromance in our political relations with the EU, the Armenian citizens are far more persistent in their expectations, which, in short, can be labeled as longing for “greater accessibility”. Greater accessibility is, for instance, when participation in European educational exchange programs for our students becomes much easier, when our citizens are issued visas to travel to EU Member States under much liberalized procedures or visa requirements are lifted at all.

You call it “greater accessibility” when low-cost airlines take off from our two cities to Europe at more affordable prices and during daytime hours. It’s when greater numbers of Armenian tourists are able to visit, explore, learn and discover Europe, see Europe with their own eyes and touch it with their own hands, and so on. It’s about a businessman willing to sell his product in the European market, or a scientist who wants, for instance, to carry out a joint research with her European colleague. Very simple, very reasonable. And this is all doable.

In-sync with the demands of its citizens, the common expectations of Armenia are clearly defined, too. Of course, we are developing our trade and economic relations with the EU and benefit from Generalised Scheme of Preferences Plus, or GSP+, trade system. Yet, heading towards the image of “closer Europe” we can anticipate the establishment of production circles in Armenia by those largest European corporations, such as Italian “Fiat”, German “Siemens”, French industrial giants and others in the line that are inevitably attracted by the large market of Eurasian Economic Union. Ahead of the idea of “closer Europe” we can also aspire, for example, to direct and resolute role of the EU in building of ultramodern high-speed railway between Yerevan and Tbilisi, which will turn Armenia and Georgia into one integrated touristic area for Europe, thus swiftly increasing the numbers of visitors. Again, very simple and very reasonable. And this is all doable.

However, sometimes we are left under the impression that EU-Armenia relations are lost in the corridors of some official institutions. Moreover, those relations are sometimes led to such narrow, marginal commentaries and substance that at the end of the day the entire concept of European civilization and values is spoiled, thus raising bewilderment among various segments in the society.

The results of the latest elections to the European Parliament demonstrate that political preferences of societies in various Member States differ substantially. Therefore, working with all European political units on a daily basis is even more necessary. Consistent and targeted efforts with all EU bodies, as well as on national level with every Member State bilaterally in order to nurture effective and efficient collaboration with the Union become a bold imperative.

The EU-Armenia partnership must “translate” our common values into concrete results to satisfy daily needs of our citizens. This is the formula of our times – values must transform into tangible, vivid and appreciable results and opportunities.

On the other hand, Europe is neither merely a donor to have expectations from, nor a final destination of one-way traffic. Armenia, too, can become attractive to Europe. It’s not only about our Christian identity or the increasing number of European tourists. It’s also our products, our creative human resources and innovative thinking.

In this vein, our long-lasting political dialogue should switch from talk and papers into decisions and results. Otherwise, the European window will turn into a European dream – far and unattainable. We must not let the European agenda of Armenia into jeopardy, because it’s not a political wordplay or an opportunism. It’s a real one. It’s a sincere and sound aspiration. Therefore, greater accessibility to Europe is our conscious choice, which can be mutually beneficial.

And, again, this is all doable.

Armenia and Europe are, first and foremost, united by our common values. Armenia, Artsakh and Armenian people worldwide have been, and are, inalienable part of European civilization and the Eastern border of the Christian world.

Our path is civilizational, and it includes both North and West. By reference to European value system, we generally appreciate both West and North. That has historically been the case. Many elements of European values have re-emerged in Armenia through the channels from the North, and that is the indisputable truth. It is crucial for us to have the existing provisional dividing lines between the West and the North disappear a moment earlier, or at least are brought to a minimum.

Today we do not seek any new role in Europe and European life. We must re-evaluate our own role as one of the firm pillars of European civilization and value system. It must be clear both to us and our partners: our security is non-negotiable, and our values have been and continue to remain the inherent part of our enduring journey.