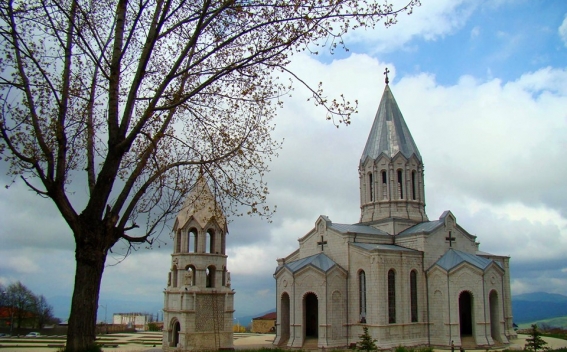 On the Sunday following the Feast of the Ascension of Our Lord, the Armenian Church celebrates “Second” Palm Sunday. The name of the feast has been derived from Palm Sunday, which precedes Easter. In the week leading up to His betrayal, crucifixion and resurrection, the “first” Palm Sunday symbolized the triumphant entry of Christ into Jerusalem where people met Him with great joy and glorified His Holy Name. The Second Palm Sunday is the commemoration of the triumphant entry of the Ascended Christ into the Heavenly Jerusalem, where the angels meet him with great happiness and delight, Qahana.am write.
According to tradition, during St. Gregory the Illuminator’s imprisonment in the pit, he was visited every day by the same angel. However one day, the angel did not come. The following morning, St. Gregory inquires to the reason for his absence, to which the angel responds that during the Ascension, Christ had passed through the ranks of the Angels, and they celebrate that feast each year. The angel visiting St. Gregory was from the fourth class of angelic hosts, and thus, on the fourth day following the Ascension, his rank of angels commemorates and celebrates Christ’s Ascension to heaven every year.
St. Gregory of Datev, one of the greatest theologians of the Armenian Church, has a famous interpretation of this event. Prior to His Ascension, the ranks of angels, except for the lowest class, who served Christ during His earthly life, were not aware of Christ’s incarnation for the salvation of man. St. Gregory’s commentary states that when the Lord was passing through the ranks of angels, they were surprised and asked, “Who was that powerful king?” The angels accompanying Christ thus informed them. This dialogue of angels is presented in the Holy Bible, in the book of Psalms:
“Lift up your heads, O ye gates; and be ye lifted up, ye everlasting doors; and the King of glory shall come in.”“Who is this King of glory? The LORD strong and mighty, the LORD mighty inbattle.”“Lift up your heads, O ye gates; even lift them up, ye everlasting doors; and the King of glory shall come in.”“Who is this King of glory?”“The LORD of hosts, he is the King of glory.” (Psalms 24:7-10).The angelic dialogue is exhibited for us, when it is heard during the Divine Liturgy, as the deacon approaches the celebrant priest with the chalice during the Great Entrance (Verapehroom).
Second Palm Sunday is one more reminder of the Ascension of Christ and grants us the hope for ascending to heaven after our deaths, and being in the bliss of God’s presence.