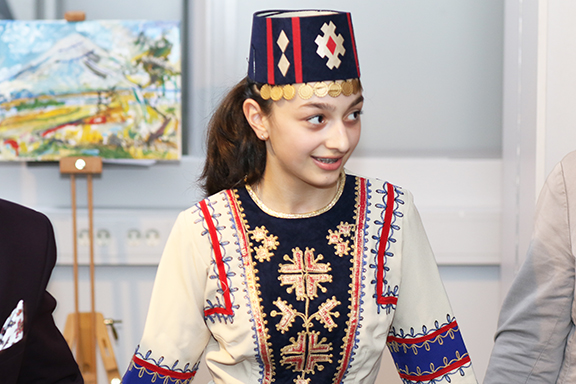 ST. PETERSBURG, Russia—Marika Parsadanelli, a descendant of Armenian Genocide survivors, wrote a book about her family history. The book, which focuses on preservation of family history, is set to be published in 2020. This vision of preserving her family story became the starting point for the global and cultural movement, “I ARMENIA,” founded by Marika in 2018.

Currently, “I ARMENIA” is focusing on 4 international media, music and art projects.

The primary mission of the movement is to popularize Armenian culture and history worldwide, through interactive projects and events.

A recent event, organized by Marika herself, was the viewing of the “The Promise,” in St. Petersburg. The film came as a shock to many of the viewers, especially to those who were unaware of the depth of pain the Armenians experienced. Spectators were overall touched by the movie, as it ended in applause.

“I wanted to show our guests what really happened to Armenia and its people. I wish people understood what genocide entails. Genocide is not a war, but a direct erasure and extermination of a nation. We need the Armenian Genocide to be officially recognized, globally. We must see the return of our churches, monasteries, and possessions which are of Armenian heritage,” added Marika Parsadanelli.

An ‘I ARMENIA’ participant painting

Marika Parsadanelli went to St. Petersburg in order to organize the event, which took place on April 17, in Gallery 153. She organized the event to commemorate the 1915 genocide.

The evening was met with a warm atmosphere. Attendees felt a strong energy, that they were part of the history, traditions, and spirit of a small but very strong Armenia. The guests were offered traditional Armenian sweets, which were baked right in front of their eyes. They had the opportunity to listen to traditional Armenian songs, and the duduk. Many cried when “Dle Yaman” was played on the duduk. At the end of the evening, all the guests united in a stream of unity with the Kochari dance.

Celebrities joined this event, with many sending greetings to guests through video messages. There were greetings from such stars as: Roman Mitichyan (Hollywood Actor), Sarik Andreasyan (Russian Director), Raffi Semerjian (Former Professor of Sarbonne University), Tankian brothers (System of Down, Band), and others.