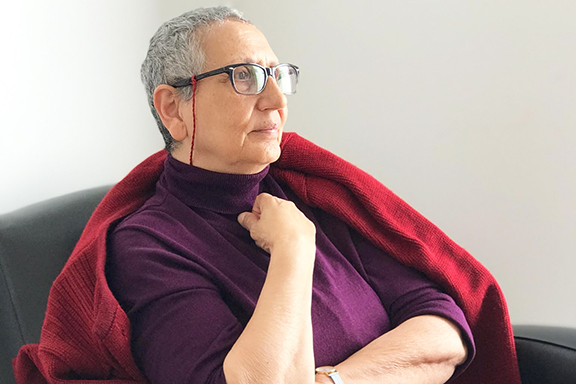 The starting point of Seta Manoukian’s artistic trajectory, perhaps began before she was born, under the watchful eye of the universe, granting her a creative and non-linear path in life. From a young age, Seta always felt deeply connected to her inner core, which has manifested into her daily practices as an ordained Buddhist nun. “I cannot tell you if my art would be different if I was not a practicing Buddhist, because I have found silence within from the very beginning—before I started painting,” she explains.

In this apparent dichotomy, Buddhism and art share commonalities in the use of symbols, vision, color, mind, emotions and feelings, but are particularly connected in the realm of silence. Seta states that all artists, “have an inner world in silence, they are similar to monks, in a sense. In their ateliers, they are like monks. Even before the moment of creation, artists can have inner crises alone, just like monks. But, in front of people, this is not evident.”

She enjoys the fruits of her labors as it appears on the canvas, as she can see where she was and where she is headed. Yet, her painting gains a unique quality because Seta “is still painting in a way, creating invisible symbols in the core. Buddhism is an art, but it is invisible. That is the difference between painting and Buddhism.” It is this energy that allows her to see beyond the subconscious. She continues by explaining that, “[artists] are aware of their subconscious, but they are ignorant about what lies beyond, and do not know about the wisdom that lies beyond, as well. And they are unaware of its compassion.”

This is what compels Seta Manoukian; her art stems from such depths. The viewer is challenged to see what lies beyond the image on the canvas. However, three years ago, viewers were unable to see Seta’s new works of art, as she was on hiatus from creating. Instead, she spent time focusing on her Buddhist practice. Describing that time in her life, Seta says, “I did not want to paint. I was refusing to paint. I was refusing it so much, that even in my own dream, someone else was painting my work. At the end, I said this is ridiculous. I have to paint. If I did not miss painting, I would not have seen it in my dream.”

She now works to create a balance between the two practices, art and Buddhism. Sometimes, as she mediates a thought comes to her mind regarding a color she needs to add to the canvas. “It is like dealing with two [good] addictions at the same time. It is like the two addictions are trying to converse together in the same language,” Seta explains.

Her art portfolio spans various time periods and styles; there is the War Period focused on expressing people’s anxieties of the Lebanese Civil War, which started in 1975. Ten years of turmoil later, there is the T-Shape Period of the 90’s where people gained horizontality. This was followed by the Organic Series, featuring blood and organic shapes in forms including: mixed media, sculpture, art in performance, and commentary on displacement. Soon after came the Vertical Series, containing a steady point on the ground, lines stretching into verticality. Seta describes her new pieces as “variations of those past themes, sometimes with different objects. It is again organic, with subjects such as nature, life and death, everything on the canvas comes from nature. It is the same, but has taken other forms.”

She started by creating her red organic shapes again, which brought her to a new place in her art. Continuing to use the circular shape, but this time representing fertility by painting white eggs, housed in colorful vessels— like a womb. However, it is not evident what the vessel is. Seta describes it as “all are one, the plant, the person, and the animal. And life is given and there is death. There is also humor.”

The circularity continues in rough-hewn rocks, representing pain, which Seta expresses in various forms on the canvas. There are rocks suspended in air by thin strands of hair. There are bloody, dark rocks that morph into a bit of lightness. However, the theme of rocks is best displayed in one particular series where the rocks are enveloped in crumpled pieces of paper that almost transform into makeshift wings, carrying the rocks away as the rocks change shape into colorful, delicate oval balls.

“On the occasions that something has bothered me in my life, that upheaval manifests [on the canvas] and [helps me to see] how I can see that upheaval in the right view. That comes forward, like the rocks I did; at that time, someone was really bothering me and I painted a rock, something heavy, then that heavy thing, slowly, changes, becomes lighter and the heaviness does not remain,” states Seta. This approach is connected to Buddhism, where change brought forth by inquisitiveness is inevitable.

The verticality from past works comes out again in a pair of hands that come together at the wrist, in prayer, pointing upwards, praying for humanity to find the oneness amongst each other in order to create a better reality. But, Seta reminds me, “Do not forget that sometimes, I have used black as well; it is not just angelical, it is all of it. In Buddhism, at the end, black and white is the same.” This manifests into two paintings, featuring the same golden container on both canvases, pouring out strips of dripping paint. In one, the background is white, with the paint stream in black. In the other, there is a black background with the paint stream in white. Seta describes this as being purification in the practice of Buddhism. Again, perhaps hinting at the essence of the T-Shape Period.

Seta is a Buddhist nun first, and her identity as an artist follows. But, right now, she is both. This may further change or morph in the years to come. How can we explain her varied series of work? Seta reflects, “My life has always been in flux, always moving and changing. I have changed a lot in my life, moving from Beirut, to America, from Hinduism to Buddhism. I have leaped a lot, leaped and leaped until the end. I have leaped a lot, and quickly. In one life, there have been many changes, changes, and changes. I feel like I have lived 3-4 lives in my one life, and such is reflected in my work.”

This retrospective expanse of Seta Manoukian’s work was recently co-published in Beirut, Lebanon, in a book, Seta Manoukian: Painting in Levitation by Kaph Books, and the Saradar Collection. Seta just returned from a trip to Beirut to participate in the book’s presentation at the Sursock Museum. She enjoyed the fact that many of the audience members were youth interested in learning about her art and the strength of one’s inner core.

In this same spirit, Seta is looking forward to share her exhibition, Seta Manoukian: Recent Work, with the public, at the Tufenkian Fine Arts Gallery, in Glendale from April 18 to May 17. She is also cognizant that viewers are not used to seeing work like hers. Seta explains that, “in Buddhism everything slowly goes into nothingness and simplicity, like a rose left in the white expanse. It is an issue of simplicity and understanding.” However, she is eager to see and hear people’s reactions to her work, because she learns something new about her art from each comment and new perspective—which helps her move forward in her work.

Regardless of people’s varied opinions, when I stand in front of one of her paintings I feel a sense of calm, peace, and meaningfulness. I invite you all to experience Seta Manoukian’s art with an open mind and an open heart.