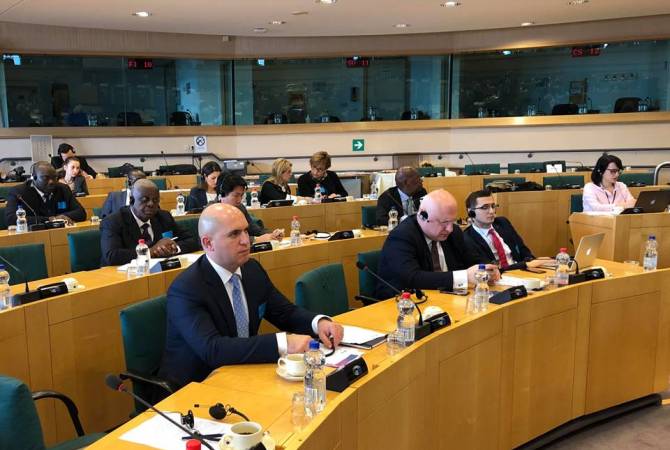 2019-04-10
YEREVAN, APRIL 10, ARMENPRESS. The Executive Committee meeting of the Centrist Democrat International (CDI) took place on April 10 in Brussels. A resolution brought by the Republican Party of Armenia was also on the agenda of the meeting, ARMENPRESS was informed from the press service of the Republican Party. Vice President of the party, the author of the resolution Armen Ashotyan presented the resolution.

Following the discussions the participants of the meeting adopted the resolution recognizing and condemning the Armenian Genocide.

The CDI is an international organization uniting nearly 100 political forces from 74 countries.

The resolution runs as following,

“Recalling the United Nations Universal Declaration of Human Rights of December 10th 1948, whereby recognition of the inherent dignity and of the equal and inalienable rights of all members of the human family is the foundation of freedom, justice and peace in the world;

Taking into consideration that while adopting the Convention on the Prevention and Punishment of the Crime of Genocide, the United Nations specifically underlined the importance of international cooperation in the struggle against that criminal offence;

Considering the 1919-1921 verdicts of the courts-martial of the Ottoman Empire on the grave crime perpetrated “against the law and humanity’’ as a legal assessment of the fact;

Appreciating the joint declaration of the Allied Powers on May 24th 1915, for the first time in history defining the most heinous crime perpetrated against the Armenian people as a “crime against humanity and civilization” and emphasizing the necessity of holding Ottoman authorities responsible, as well as the role and significance of the Sevres Peace Treaty of August 10th 1920 and US President Woodrow Wilson’s Arbitral Award of November 22nd 1920 in overcoming the consequences of the Armenian Genocide;

Recalling the EPP resolution of 3rd of March 2015 on the Armenian Genocide and European Values;

Reaffirming the principles on Human rights;

Paying tribute to the memory of the innocent victims of all genocides and crimes committed against humanity;

Stressing that the timely prevention and effective punishment of genocides and crimes against humanity should be among the main priorities of the international community;

The CDI states the following:

We condemn the genocidal acts against the Armenian people, planned and continuously perpetrated by the Ottoman Empire and various regimes of Turkey in 1894-1923, dispossession of the homeland, the massacres and ethnic cleansing aimed at the extermination of the Armenian population, the destruction of the Armenian heritage, as well as the denial of the Genocide, all attempts to avoid responsibility, to consign to oblivion the committed crimes and their consequences or to justify them, as a continuation of this crime and encouragement to commit new genocides;

We commemorate all the innocent victims of the Armenian Genocide and all those martyred and surviving heroes who struggled for their lives and human dignity. Moreover, we recognize, that the Genocide resulted in the death and dispossession not only of Armenian people but also extended to the Pontic Greeks and Assyrians peoples, and we commemorate them as well;

We join and strongly support the commitment of the Armenian people to continue the international struggle for the prevention of genocides, the restoration of the rights of people subjected to genocide and the establishment of historical justice;

We call upon the Government of Turkey to fully respect and implement the legal obligations which it has undertaken including those provisions which relate to the protection of cultural heritage and, in particular, to conduct in good faith an integrated inventory of Armenian and other cultural heritage destroyed or ruined during the past century;

We appeal to international organizations and all people of good will, regardless of their ethnic origin and religious affiliation, to unite their efforts aimed at restoring historical justice and paying tribute to the memory of the victims of the Armenian Genocide.

We support those segments of the Turkish civil society who nowadays dare to speak out against the official position of the authorities. We express the hope that recognition and condemnation of the Armenian Genocide by Turkey will serve as a starting point for the historical reconciliation of the Armenian and Turkish peoples. Therefore, we invite the Turkish Government to take the following measures pursuant to its international commitments:

To recognize and condemn the Armenian Genocide committed by the Ottoman Empire and to face its own history and memory through commemorating the victims of that heinous crime against humanity;

To provide a vision and an implementing plan of action worthy of a truly democratic Turkey, including a comprehensive resolution of issues relating to the freedom of expression and reference to the Genocide in state, society and educational institutions, as well as the repair of religious and other cultural sites and their return to the Armenian and other relevant communities;

To launch the long-awaited celebration of the Armenian national legacy based on a total Turkish-Armenian normalization anchored in the assumption of history, the pacific resolution of all outstanding matters”.