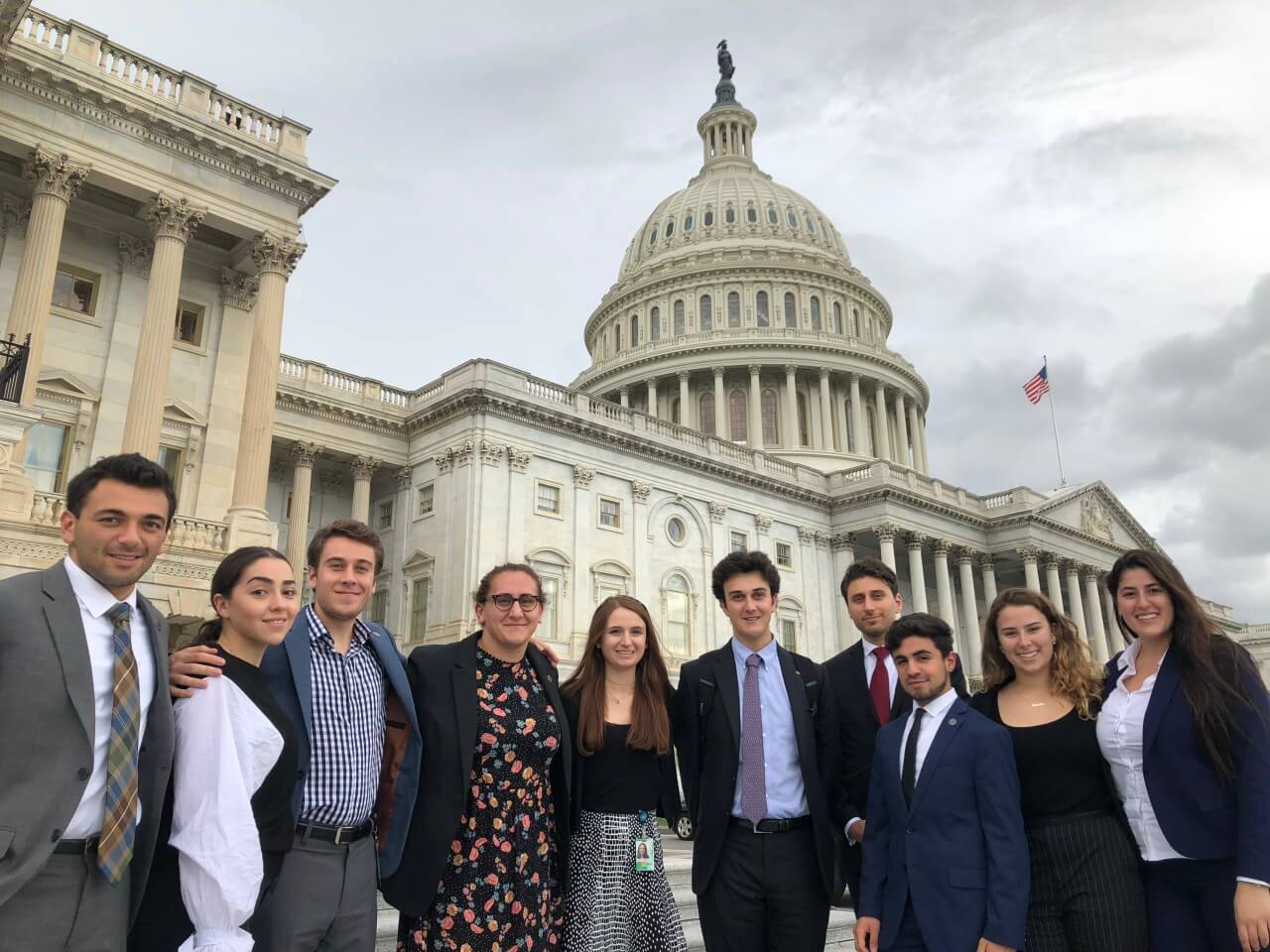 WASHINGTON, D.C. – The Armenian Assembly of America’s (Assembly) Washington, D.C. summer internship program ended on a high note in a year that motivated interns experiencing an unusually rich calendar of extraordinary events, such as the Centennial Celebration of Armenia’s First Republic and the Smithsonian Folklife Festival Featuring “Armenia: Coming Home.” This summer was especially valuable to our community’s next generation of promising leaders. This year’s participants interacted with government officials, policymakers, local leaders from various fields and organizations, and internship program alumni.

Founded in 1977, the Terjenian-Thomas Assembly Internship Program in Washington. D.C. was the first internship program offered by an Armenian organization in our nation’s capital, and has over 1,000 intern alumni. For eight weeks each summer, the program gives college students of Armenian descent an opportunity to learn about the policy-making process.

“As the summer comes to an end, so does my internship for Armenian Caucus Co-Vice Chair Representative Gus Bilirakis. This internship was invaluable and truly exceeded all of my expectations. I was able to learn so much being in a fast-paced environment with an office of Floridians, who made the office feel like home,” stated Mireille Samra.

With the backdrop of recent developments in Armenia, this summer’s class had the unique opportunity to meet with Armenia’s President Armen Sarkissian and First Lady Nouneh Sarkissian. In addition, Armenia’s First Deputy Prime Minister Ararat Mirzoyan also met with the Armenian Assembly summer internship participants and engaged in a conversation about democratic developments in Armenia and the Velvet Revolution.

“The experience of working in Washington, D.C. this summer with the Armenian Assembly of America was truly unmatched,” stated Lena Richardson. “The opportunity to learn so much about U.S.-Armenia relations in the nation’s capital through meeting with numerous prominent leaders and professionals was a very unique experience, especially right after the Velvet Revolution in Armenia. The Assembly provided us interns with unparalleled experiences that taught us so much,” she added.

The students were in Washington, D.C. for an exceptional year, including the chance to see Armenia featured on the National Mall as part of the Smithsonian Institute’s 2018 Folklife Festival. They attended the Folklife Festival’s narratives and talks about important topics, participated in traditional dancing, and enjoyed the cooking demonstrations of food most familiar to them.

“Working at the Smithsonian Folklife Festival was really touching and special to me. I had the opportunity to introduce Armenian culture to everybody, both Armenian and non-Armenian, who came to visit Washington, D.C. It was heartwarming to witness Americans learning about and appreciating Armenian culture,” stated Tamar Barsamian.

The students explored Washington with special tours of the U.S. Capitol, the Library of Congress, and the U.S. Department of State. They attended hearings, briefings, and conferences, including the 22nd Vardanants Day Lecture at the Library of Congress, the Congressional Briefing to Commemorate the 44th Anniversary of the Illegal Turkish Invasion of Cyprus, The Wilson Center’s Annual Haleh Esfandiari Forum: Protecting America’s Global Leadership with Senator Chris Van Hollen, and more.

“Being interns at the Armenian Assembly of America, we are provided with many opportunities to get a close look at what is happening in our world today. We were also fortunate enough to visit the Library of Congress and attend the 22nd Vardanants Day Armenian Lecture Series,” Nishanian and Martirossian said. “Opportunities like this one, which we would not have been given without the Armenian Assembly, occur once in a lifetime and are extremely valuable in building our future careers,” they added.

The Armenian Assembly of America Summer Internship Programs – both in Washington, D.C. and Yerevan, Armenia – have been celebrated and strongly supported by the Armenian community with major gifts from the Richard Tufenkian Memorial Fund, the John Hanessian Scholarship Fund, the Armen Astarjian Scholarship Fund, the Ohanian Memorial Fund, Ann Hintlian, Ann Nahigian, James and Connie Melikian, the Knights of Vartan, the Estate of Haig J. Boyadjian, and the Estate of George Judge Karabedian (George Kay), as well as generous contributions in memory of former Assembly Board Members Dr. Lionel Galstaun, Peter Kezirian, and John O’Connor. In 2003, the Armenian Assembly’s Summer Internship Program was renamed in honor of Aram and Florence Terjenian and Annie Thomas after the announcement of their pace-setting $1 million donation to the program.

“It has been an honor for me to coordinate the Armenian Assembly of America’s Terjenian-Thomas Internship Program this summer. I am very happy to have witnessed how rich the Armenian American community is with the next generation of active and inquisitive students, and how passionate they all are about strengthening U.S.-Armenia relations. These interns proved to be wonderful young professionals, and all performed wonderfully at their individual internship placements,” stated this summer’s internship program coordinator, Milena Davtyan. She is a Terjenian-Thomas Assembly Internship Program alumna (class of 2017) from Salt Lake City, Utah who attends the University of Utah.

To find out more about the 2018 summer interns’ journey in Washington, D.C., visit the Assembly’s Intern Blog, Facebook, Instagram, and Twitter. Stay tuned for updates on the Armenian Assembly’s summer internship program in Yerevan, Armenia!