STOP THE KILLING: STAND UP AGAINST ALIYEV’S ANTI-ARMENIAN AGGRESSION BY SUPPORTING THE ROYCE-ENGEL LETTER 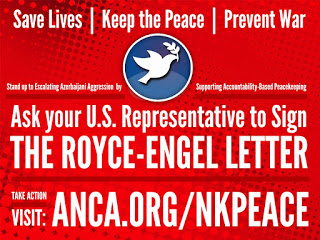 At around 6:30 Thursday evening, just as the late summer sun was getting ready to set over her village of Paravakar, in the Tavoush region of Armenia, 83 year old Paytsar Aghajanyan was killed by Azerbaijani mortar fire while working in her garden. One village over, in Bertavan, Sona Revazyan, 41, and Shoushan Asadryan, 94, met with the same fate – again a result of Azerbaijani shelling. Two others were wounded in separate attacks.
The response from our government? Yet another weak statement by U.S. Ambassador James Warlick, who tweeted that all parties should refrain from violence.
No mention of the Azerbaijani attacks. Not a word about the Armenian deaths. Another example of international mediators giving Baku cover – effectively enabling escalating Azerbaijani aggression – by blaming both sides for what all the world knows are Ilham Aliyev’s actions.
House Foreign Affairs Committee Chairman Ed Royce (R-CA) and Ranking Democrat Eliot Engel are asking their Congressional colleagues to join them in calling upon Ambassador Warlick to immediately end the farce of false parity, and to actively support three concrete steps to stop Azerbaijan’s violence:  1) Pulling back snipers, 2) Adding observers, 3) Deploying gunfire locator systems to make clear who is attacking first. Steps – that Armenia and Artsakh have already agreed to. Steps that Azerbaijan rejects.
Take a moment to ask your U.S. Representative to sign the Royce-Engel letter to OSCE Minsk Group Co-Chair James Warlick, calling for a transition away from a failed policy of false parity to a constructive, accountability-based approach to peacekeeping.
>> Follow up your letter to your U.S. Representative with a phone call http://cqrcengage.com/anca/app/make-a-call?1&engagementId=132788&ep=AAAAC2Flc0NpcGhlcjAxErMlpqJfqgSig8GuCN9zf9aFAYq76Q1M0ZMTVHW56mwKUV3JVZZy5pF2ppNjunxgXcOxEwF5xk3W2Gr3dfO1qDatzybQlDUXlkIwu4SiGtU&lp=0
>> Learn more about Paytsar, Sona, Shoushan and the latest Azerbaijani attack.
http://armenianweekly.com/2015/09/24/three-civilians-killed/
>> Learn more about the Royce-Engel Letter
http://cqrcengage.com/anca/app/thru?ep=AAAAC2Flc0NpcGhlcjAxAlSbLGlPka-VkLDBJhgPCt7NLv97F6Qdfrd8VNd0cuuwh8d0UjhOUeaiTJTLzaZLSC9D2smgTDCarEbNJxTKat-RGBkR36hvLpfTkSTzXxaeg_ly8XhMPe44Sa7sS5J7EWD1UmSSUpDvxNjt7ApywtAs_tzldCjhbk3mP_XYkpHWvoOA5auxPNoOxweSD4bc9Q5T4P7Nf1sHC62ZWtn8AdKBHx2YRhhNs-NejT326Eq–gXM-4Ar8ixHRyXiSHSm&lp=0