Feast of the Holy Cross of Varak 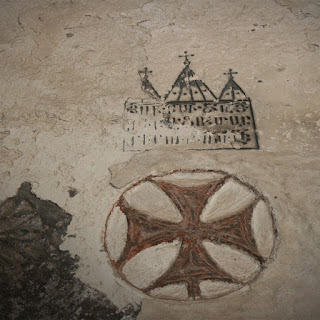 On Sunday, September 27, Armenian Churches worldwide will celebrate the Feast of the Holy Cross of Varak—an observance unique to the Armenian Church. In the 7th century, a monk named Totig received a vision of a brilliant cross descending from Mount Varak (in historic Armenia) and coming to rest on the monastery at the mountain’s foot. Totig raced to where the vision had led him, and there found a miraculous Christian relic: a fragment of the True Cross of Jesus Christ!
A small church and cross carved on the wall at Hovanavank Monastery in Armenia.
How had it gotten there? The relic had been brought to Armenia by St. Hripsime, in the late 3rd century, during her flight to find refuge from the persecutions of pagan Rome. When St. Hripsime was martyred by King Drtad, the hiding place of the cross was forgotten—and the holy relic had languished in its secret place for nearly 300 years, before being found again by the monk Totig.
To commemorate this discovery, the catholicos of the time, St. Nersess the Builder, established a feast day. And the Holy Cross became a relic of great power in Armenia, moving from Varak to Sepastia and finally to Van, where it still could be seen by pilgrims—until the time of the Genocide.
Click here to read a meditation on the meaning of the Season of the Holy Cross. http://www.armenianchurch-ed.net/feasts/the-holy-cross/blog-feature
http://us1.campaign-archive1.com/?u=727aaae8ea56658ecf4a092d5&id=bc5ae2f4da&e=62209cfd8c