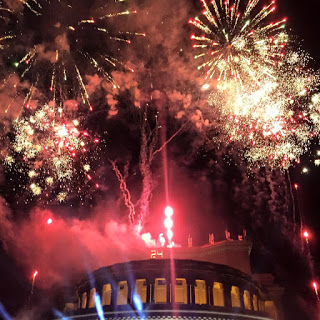 Last Monday, September 21st, witnessed the 24th celebration of Armenia’s coveted independence. The city was bustling, everywhere you went. Even the serenity normally found in Yerevan’s underground metro station–where photography of any kind is usually strictly prohibited–was alive with the vibrant melodies of Armenia’s most beloved national instruments and live dancers forming line dances with bystanders longer than the length of an entire train. The night time included fireworks, musical performances by some of Yerevan’s greatest musical talents, and an overall sense of camaraderie and achievement amongst Yerevan’s residents.
The festivities also had a digital presence, however, as Armenians all over the world pitched in their two cents about the day on social media. While most expressed statements of pride, joyful emoticons, and exclamation points, others conveyed skepticism about how far Armenia as an Independent State has come over the last 24 years. Our Facebook wall was privy to some of these comments, and it was interesting for us to encounter first hand this forum on Armenia today.
At 1A, we celebrate these individual voices, because they represent opinions and independent thought, which are so important for progress and future change. We we wanted to reflect on what took place on Monday because we experience these differing voices and opinions, on a micro level, here in our office, when our teams between Yerevan and NYC brainstorm for campaigns. The value of these conversations should not be underestimated because what they represent is the fact that, regardless of stance, people care enough to speak up.
Ultimately, it’s not governments or factories or technologies, but people that make change possible and we believe in us. No one can predict exactly what the future holds for this small, but strong-willed nation, but if each of us continues to play our part, one thing is certain–change can and will take place. For the better. So heres to 24 years and many more great ones to come!
Cheers,
The 1A Team
http://us9.campaign-archive2.com/?u=f4d7c7628a6923a73c48f5c57&id=dbc8b27346&e=a9273af7b4