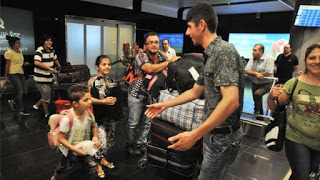 A picture taken on August 13, 2012 shows Armenian man (L) as he meets his relatives upon their arrival from Syria at Zvarnots airport outside Yerevan. As Europe’s refugee crisis unfolds, Armenia says it has hosted thousands of Syrians, particularly those from the Christian-Armenian community. Since the start of the conflict, at least 15,000 Syrians have found refuge in Armenia, according to UNHCR figures.The majority of these are descendents of Armenians who escaped the mass killings and deportations by the Ottoman Turks in 1915, and were given refuge in Syria.
Image copyrightGetty Images. Since the start of the conflict, 15,000 Syrians have found refuge in Armenia.
At the time, Syria’s Deir Ezzor region became a major destination for Armenians subjected to death marches through the desert. But a century later, increasing numbers of Syrian Armenians are now driving to Beirut, where they board flights to Yerevan.

Before the conflict, the estimated number of ethnic Armenians in Syria was about 100,000. More than 60,000 of them settled in Aleppo, with smaller communities in Kessab, Qamishli, Yacubiyah, Kobane and Damascus.
Many in the Armenian diaspora consider Syrian-Armenians as their “mother community”.
The influx of Syrian refugees into Armenia started in 2012, when over 6,500 people fled. In 2013, the number of Syrian Armenians fleeing reached 11,000 and by August 2015, over 15,000 Armenians had been reported to be seeking asylum in Armenia.
For Syria’s ethnic Armenians, Armenia represents a safe choice – not only as an ancient homeland and predominantly Christian country – but also one with migration policies and repatriation programme that make it easy for them to settle.

The Armenian government has adopted “special measures” to help Syrian Armenians. It authorised consular offices in Syria, Iraq and Lebanon to issue citizenship and passports to Syrian Armenians free of charge.
But Armenia’s own economic woes mean that it struggles to provide accommodation and jobs for the newly-arrived Syrians. State assistance for Syrian Armenians covers mainly education, medical care and the provision of documents.
“We are concerned about the rental of accommodation; this is already a challenge to us. We have to turn to international and benevolent organisations for help because we will face a problem. The flow is too big, we cannot cope,” Firdus Zakaryan, an official from Armenia’s Ministry of Diaspora, said recently.
Armenian state officials insist that the plight of even the most impoverished refugees in Armenia pales in comparison with the four million displaced Syrians, many of whom struggle for life in camps and rundown urban areas of Turkey, Lebanon and Jordan.
Many who have not made it to Armenian cities have now settled in the disputed Armenian enclave of Nagorno-Karabakh in Azerbaijan.
Robert Matevosyan, head of the district’s resettlement department, says moreSyrian Armenians are expressing an interest in settling in the area.
BBC Monitoring reports and analyses news from TV, radio, web and print media around the world. You can follow BBC Monitoring on Twitter and Facebook.
http://www.bbc.com/news/world-europe-34210854