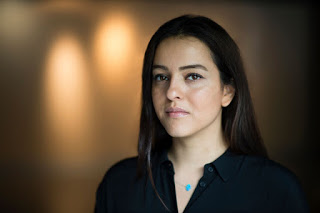 Tori Egherman contributed translation to this post.
Portrait of Newsha Tavakolian taken for the Prince Claus Fund by Frank van Beek. Image provided by the Prince Claus Fund and used with permission.  Newsha Tavakolian, considered to be one of Iran’s first professional female photographers, was announced as the recipient of the Dutch Prince Claus Award for 2015 earlier this month.
The award honours outstanding achievements in the field of culture and development. In a press release, the Prince Claus Foundation explained Tavakolian’s selection due to her “bold reportage of political events to sensitive portraits and evocative series on subjects such as the insecurity of middle-class youth, female Kurdish fighters or the impact of sanctions on individual lives” which “inspires young photographers across the Middle East”.
Her work has been published in Time magazine, National Geographic, Le Figaro, Colors, The New York Times, Der Spiegel, and Iran’s first women’s newspaper Zan. A recent photo essay of hers entitled “Stress and Hope in Tehran” in The New York Times about ordinary lives of Iranians in Tehran affected by sanctions gained a lot of traction in anticipation of the historic and disputed nuclear agreement achieved between Iran and the P5+1 countries. A photo essay by Tavakolian on ordinary lives affected by sanctions in Iran. Screenshot of The New York Times spread.
Her husband is Thomas Erdbrink, a Dutch national and the Tehran bureau chief for The New York Times. In an tributary article titled “She is not ‘the wife’: Newsha Tavakolian had to fight for every step” for the Dutch newspaper de Volkskrant on 5 September, 2015, he described her journalistic ethos, passion and integrity:

In her own country, her press credentials were revoked twice by authorities. The last time she couldn’t work, she spent long months depressed on the couch. Angry at everything and everyone. She felt worthless.
In protest, she began a project in our bedroom. It became a studio where she made portraits of her generation, who were just as angry and depressed as she was. She named it “Look”. Newsha wanted the world to see that Iran is different from what they think, and she wanted Iranians to see how depressed she had become…
That success made her more resolute. In 2014, a French banker gave her a prize of 50,000 euros for a project with young Iranians. But she wouldn’t stand for his decision to call it “The Lost Generation” and to personally edit her photos. She gave the money back.
“My integrity is not for sale,” she wrote in an open letter that was shared thousands of times on Facebook. In the end, the banker was overruled by his own jury and Newsha’s project went forward exactly the way she wanted it to.

On Tavakolian’s struggles to overcome the hurdles before a female photojournalist in Iran, Erdbrink explained:

She heard about a new journal: Zan (Woman). Newsha begged for a job as a photographer, but there was only an opening for a receptionist. One day, when all the male photographers were out, there was an urgent need for an image for the front cover. “Go after it, for God’s sake,” the chief editor said.
That day she sent a fax to her father: “I have a real job with a salary. I’m going to buy my own car and vacation on the Caspian Sea.” But she had no time for a vacation, not then and not now.
Newsha climbed over a wall and was the only woman in a football stadium full of men. When the male chief editor didn’t want to publish her photograph from a women’s rights demonstration on the cover, she argued so fiercely with him that she was fired and then a week later rehired.
In 1999, when for six days angry students fought in the streets of Tehran for more freedom, she slept between the barricades. She climbed trees to make photos. Her male colleagues can vividly recall how indignant they were that a young girl took better pictures than they did. A screen shot of “Our Man in Tehran” on The New York Times, featuring Thomas Erdbrink and Newsha Tavakolian.
Newsha was also prominently featured in Erdbrink’s series “Our Man in Tehran”, a documentary produced by Dutch Television channel VPRO and featured on The New York Times.
On her reaction to gaining attention as merely Erdbrink’s husband, Erdbrink described her annoyance as such:

After my series on Iran was released, we fought for months. Some people in the Netherlands called her “the wife of Our Man in Tehran.” She reproached me asking if she’d fought all these years to “become the wife of”?

Upon hearing of her 100,000-euro prize for the Prins Claus Award, Tavakolian explained on her Facebook page:

Unfortunately it is hard for me to enjoy this prize as much as I would like to, seeing the region where I work and live in flames and tens of thousands seeking refuge in faraway lands.

She asked for suggestions for organisations she could contribute to that “help people in a good and transparent way,” and dedicated her award to “all colleagues who risk their lives telling stories of others that no one listens too.”
Tavakolian has allocated 15,000 euros of her prize money to an organisation helping Syrian and Iraqi refugees, while 30,000 euros of her prize money has already been set aside for various charities and funds working on independent photography, children’s cancer and wildlife preservation in Iran.
On her reactions to the prize, Tavakolian also said:

I am extremely humbled and overwhelmed to have been chosen as the winner of the 2015 principal Prince Claus award. I will never forget this day in my life.