Feast of the Nativity of the Holy Mother-of-God 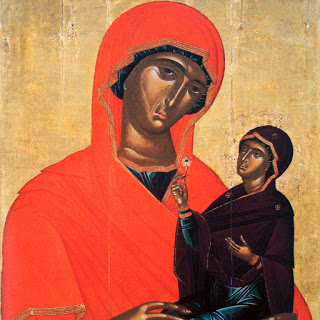 On Tuesday, September 8, the worldwide Armenian Church will celebrate the Feast of the Nativity of the Holy Mother-of-God. St. Mary was born to Joachim and Anna, a devout couple whose earnest prayers for a child were answered with the birth of a daughter. Mary’s birth is not recorded in the Gospel, but in all likelihood it occurred in Bethlehem or Nazareth, some 20 years before Christ’s nativity.
A Greek icon of St. Anna and St. Mary by Angelos Akotantos (15th century).
Her life of holiness and purity, and her graceful acceptance of the role to which God called her, as the mother of Jesus Christ, all make Mary one of the pre-eminent exemplars of the Christian faith, whose birth and very conception are occasions for celebration in the church.
The Armenian Church has celebrated the Feast of the Nativity of the Holy Mother-of-God since the 13th century. St. Mary is known in the Armenian Church as Asdvadzamayr-Asdvadzadzin, the “Mother of God” and the “Bearer of God”—a position doctrinally established at the Ecumenical Council of Ephesus in the 5th century. Click here to view a short video about St. Mary in the Armenian Church.
At St. Vartan Armenian Cathedral in New York City, the Divine Liturgy will be celebrated at 10 a.m. on Tuesday, September 8.
http://us1.campaign-archive1.com/?u=727aaae8ea56658ecf4a092d5&id=56f76d75a0&e=62209cfd8c