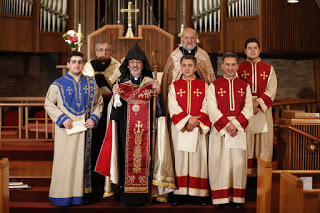 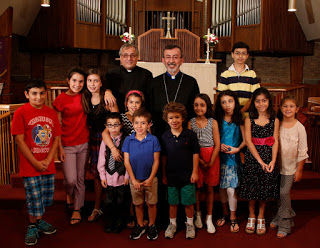 “Coming from one of the largest communities in our Diocese to this mission parish was humbling,” Mr. Kalanjian said. “It established a new sense of responsibility in me.”
Dr. Mansourian, Mr. Nadryan, and Mr. Oskian have also worked with Fr. Ohanesian during his monthly visits to the parish.
Archbishop Barsamian congratulated the newly ordained altar servers and expressed his gratitude to them for their dedication to the Armenian Church.

Following the ordination service, the children’s choir and orchestra gave renderings of “Sourp Asdvadz” and “Hayr Mer.” The children also recited brief biographies of Armenian heroes, whose lives they had studied in their Sunday School and Armenian history classes.
An anniversary dinner concluded the evening. The parish council expressed its gratitude to the Diocese for its support of the mission community over the past 20 years, and recognized the efforts of the community’s original founders and longtime parishioners. Among them were one of the parish founders Helen Fakhoorian, longtime organist and choir director Alla Foliyev, and the late Armine Mooradian Van Roon who published the parish’s Loosavorich newsletter.
Fr. Ohanesian shared warm memories during his tenure as visiting pastor over the last two years. Since he began serving in Nashville in 2013, he helped establish a Sunday School and encouraged the parishioners to meet not only for services, but also to host cultural and social events.
The Sunday School now meets twice a month and offers religious education, as well as Armenian language instruction and history lessons. Robyn Saakian, one of the school’s founders, has been instrumental in its success. And the parish has launched “Community Night,” an opportunity for families to meet for dinner and fellowship. All gatherings take place at the Church of the Advent Episcopal in Nashville.
“When I agreed to assist Nashville on a regular basis, it was after much prayer,” Fr. Ohanesian said. “The community immediately opened up to Christian wisdom and wanted to be fed. We have come a long way from no altar servers to four, who were just ordained, and also with no Sunday School to one with 19 children.”
Fr. Tateos Abdalian, who served the parish as a visiting pastor for six years, also shared recollections of his time in Nashville. He said it was fulfilling to see children he had baptized and couples he had married now involved in the parish.
“It has always been a family-oriented community,” he said. “They’re hard-working people with great pride of heritage.”
Archbishop Barsamian commended the parish for its continued efforts to preserve and pass on the Armenian faith and culture. “Thanks to the dedicated members of this community, a new generation of Armenian children in Nashville is being raised in the traditions of the Armenian Church,” he said.
“A golden weekend”
On Sunday, August 9, Archbishop Barsamian celebrated the Divine Liturgy. The parish choir, having spent Friday evening and Saturday afternoon rehearsing with Maestro Khoren Mekanejian, the Diocese’s Music Ministry coordinator, sang the hymns of the badarak.
In a sermon on the significance of the centennial year of the Armenian Genocide, Archbishop Barsamian discussed last spring’s canonization of the Holy Martyrs of 1915. He said the Armenian Church today is “a miracle that rose out of the ashes of the Genocide.”
He thanked the Church of the Advent Episcopal for welcoming the Armenian community and invited its rector, the Rev. Brian McVey, to give the benediction.
At a luncheon following the Divine Liturgy, parish leaders thanked the Primate and Diocesan representatives for their visit.
“It was a golden weekend for us,” said parish council vice chair Arnold Hahamyan. “It has been a successful 20 years for our community, and we are looking forward to the next chapter.”
Setting roots in Nashville
The Armenian Church of Nashville mission parish began to coalesce in the mid-1990s, when Armenian refugees from Baku, Azerbaijan, began arriving in the area.
“Over 60 Armenian refugee families arrived here from Baku—destitute financially, emotionally, and spiritually,” recalled Nancy Fox, one of the parish founders. “They urgently needed a lifeline—a loving church community to come to their aid. We organized this parish for them, for our Armenian community in the diaspora, and for the generations to come.”
Mr. Hahamyan recalled how the early founders scanned the White Pages for Armenian names, and cold-called people asking them to join the parish. The first Divine Liturgy was celebrated by the Rev. Fr. Nersess Jebejian in March 1996. Other clergy who have served the parish include the Very Rev. Fr. Simeon Odabashian and the Very Rev. Fr. Mamigon Kiledjian.
Some 200 Armenians live in the area, representing a cross-section of immigrants from Armenia, Azerbaijan, Iran, and other parts of the diaspora, as well as generations of American-born Armenians.
“The number of people that are engaged has grown,” Mr. Hahamyan said, thanks in part to the Internet age, and the parish’s outreach via its website and social media pages.
In addition to services and “Community Night” gatherings, the parish hosts a picnic in the fall and a New Year’s Eve celebration each year.
“This community is a testament to the time-honored Armenian Christian tradition of coming together to worship,” Razmig Kalanjian said. “Everyone contributes in any way they can.”
###
Photos attached by Nancy Fox and Andrew Jensen.
Photo 1: Clergy with the newly ordained altar servers in Nashville.
Photo 2: Sunday School children pose for a photo with Archbishop Barsamian and Fr. Ohanesian.
Photo 3: The choir sings during the Divine Liturgy.