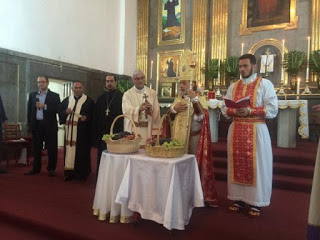 The Diocese of the Armenian Church of Mexico was transferred to operate under the jurisdiction of the Western Diocese in November 2014 by the Pontifical Encyclical of His Holiness Karekin II, Supreme Patriarch and Catholicos of All Armenians. Within those nine months, the Diocesan Primate has made five pastoral visits to the Armenian community in Mexico with the most recent being in April for the official opening ceremony of the Armenian Genocide exhibition at the Museum of Tolerance in the nation’s capital Mexico City.
In March 2015, the Diocesan Primate led a delegation of Diocesan benefactors to Mexico City for the official commemoration of the Armenian Genocide. On Sunday, March 15 members of the Armenian-Mexican community and the delegation from California participated in the Holy Mass at the Metropolitan Cathedral of Mexico in commemoration of the Centennial of the Armenian Genocide. The celebrant was His Eminence Cardinal Norberto Rivera Carrera, Mexico’s Archbishop of the Roman Catholic Church. His Eminence Archbishop Hovnan Derderian participated in the service along with ecumenical officials including representatives of the Antiochian Orthodox Church, the Maronite Church, the Anglican Church as well as inter-religious officials of the Jewish Faith.
The liturgy was widely covered by the Mexican media.
Tremendous progress has been made in the short span to further the mission of the Armenian Apostolic Church in Mexico City and to support the Mexican-Armenian community in search of their ancestral roots. Archbishop Derderian has constantly stressed the leadership role of Ambassador Hovhannissian in uniting the Armenian community since his appointment as Ambassador of the Republic of Armenia to Mexico.
On Sunday, August 30, Archbishop Derderian celebrated the Divine Liturgy at Our Lady of Lebanon Maronite Church in Mexico City marking it the first time that the Divine Liturgy of the Divine Liturgy of the Armenian Apostolic Holy Church was celebrated in the land of the Aztecs. Accompanying the Primate on his fifth pastoral visit to Mexico City were the Rev. Fr. Nerses Hayrapetyan, Pastor of St. Sarkis Armenian Church in Santa Clarita, Deacon Artak Khachikyan.
With the sanctuary filled near to capacity, the inaugural service was tremendously received by the faithful. His Eminence also officiated the Blessing of the Grapes ceremony and explained the significance of the ceremonial rite.
In his remarks, the Primate expressed his wholehearted gratitude to His Grace Bishop George Saad Abi Younes, the Bishop of the Maronite Church of Mexico for the warm reception and cordial hospitality.
Archbishop Derderian spoke about Lebanon’s crucial role in the creation of the Armenian Diaspora following the Armenian Genocide and the displacement of the Armenian people. “There is no doubt as to the extent of the mutual love and respect shared by the Armenian and Lebanese people. Since the Armenian Genocide of 1915, Lebanon most graciously welcomed tens of thousands of refugee Armenians and embraced the Armenian heritage and culture.”
Reception at the Armenian Embassy
In the late afternoon, a reception was graciously hosted at the Armenian Embassy by the Armenian Ambassador His Excellency Grigor Hovhannissian and his spouse.
Among the dignitaries in attendance were His Excellency Eduardo Malayan, Ambassador of the Russian Federation to Mexico, Dr. Jose Sarukhan, former Rector (President) of the National Autonomous University of Mexico (UNAM), philanthropists Mr. and Mrs. Vahe Garabedian amongst others. The Maronite Bishop George Saad Abi Younes and Fr. Christopher of the Russian Orthodox Church were among the guest clergymen in attendance.
In his remarks, Ambassador Hovhnannissian expressed his gratitude to the Primate for the pastoral guidance of the Mexican-Armenian community noting his positive impact on the community since his first visit.
Archbishop Derderian shared his vision for the newly established community which includes a permanent pastoral assignment of a clergyman and eventually a church building in the Armenian architectural style.
http://www.armenianchurchwd.com/news/historic-divine-liturgy-celebrated-in-mexico-city/?utm_source=newsletterGamma&utm_medium=email&utm_content=Title&utm_campaign=News