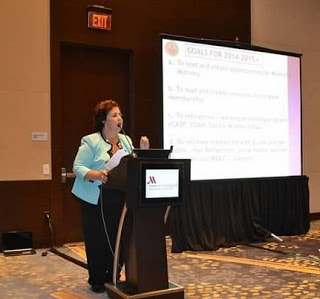 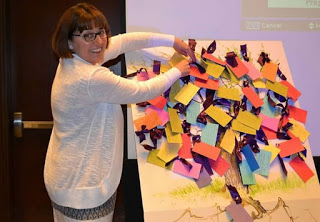 More than 50 delegates, representing 29 parishes across the Eastern Diocese, took part in this year’s meetings, held from May 6 through 10. The gathering ran concurrently with the 113th Diocesan Assembly and the National Commemoration of the Armenian Genocide Centennial in the nation’s capital. 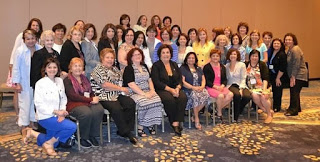 On Wednesday evening, May 6, the delegates traveled to Washington’s St. Mary Church, the host parish of the 113th Diocesan Assembly, to take part in the welcoming service for His Holiness Karekin II, the Supreme Patriarch and Catholicos of All Armenians, who was in Washington for the centennial events.
On Thursday, the delegates were officially welcomed to the Women’s Guild Assembly by Nancy Kassabian, chair of the Women’s Guild Central Council, which organizes the annual meeting. Kassabian spoke about the organization’s mission and gave an overview of its current projects.
The Rev. Fr. Simeon Odabashian, Diocesan Vicar and liaison between the Women’s Guild Central Council and the Diocesan Council, led the participants in prayer and gave a message stressing the importance of their work, both at the parish and Diocesan levels.
Louisa Bagdasarian, chair of the Vanadzor committee, gave a presentation on the Vanadzor Old Age Home, a facility operated by the Fund for Armenian Relief in Vanadzor, Armenia, which the Women’s Guild helps support through its Saintly Women’s Day events and other fundraisers. The delegates presented Bagdasarian with a donation for the home.
Lucy Murad, Tanya Bukucuyan, and Anne Terkanian gave a report on the Children of Armenia Sponsorship Program. They encouraged all local parishes to support the program, and received a donation from the delegates from this year’s fundraising.
Elections were held for new Central Council members. Delegates expressed their appreciation to outgoing members Meliné Grigorian, who served three terms, and Sherry Edwards, who served two terms, for their dedication and commitment to the Women’s Guild.
On Friday, Dr. Tamar Vasoian led a workshop titled “The Legacy of Our Roots: Branching Out.” Dr. Vasoian shared stories of Genocide survivors and asked the delegates to contribute to a “Legacy Tree”—a poster-sized illustration of a tree on which each delegate pinned a wish, hope, or prayer for the next generation.
“The responses were positive, heartwarming, and uplifting,” said Kassabian. “The general theme was a prayer that the legacy of our ancestors will resonate with our children and future generations to preserve and sustain our Armenian Christian faith and heritage.”
Charlotte Sevazlian and Sherry Edwards presented a gallery of photos titled “Year in Review,” which featured highlights of local Women’s Guilds activities in the parishes. Delegates had the opportunity to share updates and advice from local guilds. The day’s meeting concluded with a raffle featuring more than 30 items donated by the Central Council members.
On Sunday, May 10, the delegates received the blessings of His Holiness Karekin II and His Holiness Aram I, the Catholicos of the Great House of Cilicia, at a  “A Mother’s Day Prayer Service and Blessing of Mothers.”
Kassabian said she has received positive feedback on this year’s meetings.
“Your leadership, professionalism, devotion, passion, and insistence that we are not just the kitchen crew, but the backbone of each and every church we represent is invaluable,” said Women’s Guild member Gail Boroyan. “It is my belief that you have helped transform the Women’s Guild into a relevant, vibrant and re-energized ministry.”
Next year’s Women’s Guild Assembly will be held in Cleveland, OH. Below are the names of the Women’s Guild Central Council members elected for the 2015-16 term.
2015-16 Women’s Guild Central Council
Nancy Kassabian, chair
Charlotte Sevazlian, vice chair
Yn. Patricia Buttero, recording secretary
Robin Williams, corresponding secretary
Hasmig Minassian, treasurer
Barbara Haratunian, dues and membership
Yn. Jennifer Karapetyan, advisor on Saintly Women’s Day
Louisa Baghdasarian, advisor on the Vanadzor Old Age Home
Elizabeth Barone, advisor on fundraising
###
Photos attached.
Photo 1: Nancy Kassabian, chair of the Women’s Guild Central Council, welcomes delegates to the assembly.
Photo 2: Delegates pinned notes with wishes, hopes, or prayers for the next generation on a “Legacy Tree.”
Photo 3: Delegates pose for a group photo during the Women’s Guild Assembly.