Beginnings of the Christian Faith in Armenia 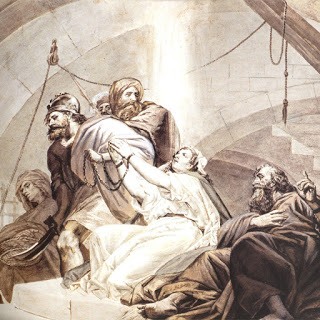 eNewsletter of the Eastern Diocese
On Saturday, July 18, the Armenian Church will observe the Feast of St. Thaddeus the Apostle and St. Sandukht the Virgin. The story of these two saints sheds light on the early days of Christianity in Armenia. Imagine a time of great political and military conflict; a pagan kingdom ruled by a powerful royal family: this was Armenia in the first century. The kingdom held strongly to its inherited pagan practices—until a strange man ventured to Armenia.
St. Thaddeus, St. Sandukht, and other imprisoned Christians by the 19th-century Italian artist Juliano Zasso.
His name was Thaddeus, and he was one of the apostles of Jesus Christ. He preached in people’s homes, in hidden underground chambers, in marketplaces, and in the streets. People listened intently, and moved by the Good News, many converted to Christianity.
Rumors of this unusual man reached a young girl named Sandukht, the daughter of Armenia’s king Sanatrouk. The Christian faith made such an impact on Sandukht’s life that she declared her belief in Christ and was baptized. But when the king’s spies reported the news to her father, Sandukht was sentenced to jail.
The king asked his daughter to choose between the crown and the sword—either she would renounce Christianity and serve as a pagan princess or face death. Sandukht chose the sword, and became Armenia’s first Christian martyr. Shortly after Sandukht’s death, Thaddeus was also executed by the king. Their sacrifices planted the seeds of the Christian faith in Armenia—a faith that 300 years later would become the foundation on which Christian Armenia was to be built.
Click here to read more about these saints on our blog.
http://www.armenianchurch-ed.net/wpblog/2015/07/between-crown-and-sword/
http://us1.campaign-archive1.com/?u=727aaae8ea56658ecf4a092d5&id=21009c7223&e=62209cfd8c