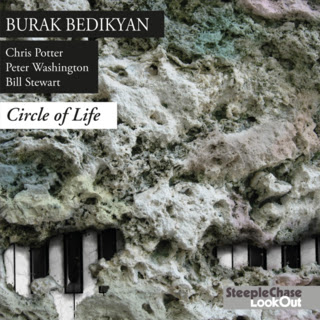 This is the first time I listened to Burak Bedikyan. Although he seems like a pianist who basically gives performances in Turkey, we see he has worked with an ultra-fancy band featuring Chris Potter and Bill Stewart in this project who definitely attract great attention at all points. If any member would be included to these musicians, it seems that Scott Colley could give brilliant contribution. But If it comes to 4-beat orthodox performances, Peter Washington definitely increases the level. By the way, Potter and Washington [Greg Gisbert/On Second Thought (1996)],[Billy Drummond/Dubai (2006)] and Bedikyan and Washington [Ferit Odman /Nommo (2010)] have common history.Bedikyan has total of 12 tracks along with Lennon/McCartney’s “Here,There and Everywhere”. His “First Steps” is substantially good as a reminiscent of a Monk tune. Potter is greatly shining and Bedikyan is basically excellent at his solos.  Bill Stewart [Lage Lund/Foolhardy(2013)] can revitalise anyone with his drums playing which has a strike effect on even an inanimate body. Even these could be the reason for me to tell “I am happy to buy this album !The second song is “Here, There and Everywhere”. Even it is a performance in which the melody emphasis is made without Potter, Bill Stewart reacts to every melody played by Bedikyan. They make a good fist of playing as a trio.3rd song [Do You Still Have Hope] starts with the unaccompanied saxophone solo by Potter. Potter and Bedikyan have trades on solos. If it wasn’t a bossanova, they could make more aggressive performances on this one. 4th song [For Old Times Sake] is a swing song for the piano trio. In addition to that it has a beautiful melody, it gives a good feeling thanks to the vividly powerful rhythms of the performance. It has 8 bar trades between piano and drums with a bass solo, in which we may enjoy listening to the trio.5th and 6th songs are called [Prayer For Forgiveness Part 1: Delusion – Part 2: Serenity]. It is a performance where the improvisation is strong. Although Washington who takes a rest in these songs; Potter, Bedikyan and Bill Stewart present natural flavors with their beautiful performances. 7th song [Joy of Giving] is a smooth Bossa-Nova song.8th song [TF (for Tommy Flanagan )] is a composition dedicated to Tommy Flanagan. Probably, Bedikyan composed this in a period of his life when his emotions were dense. Touching us emotionally, this song does our heart good. Washington who had joined the “Tommy Flanagan Trio” long time ago makes sense of it as deserved.The remaining songs are odd-time or 3/4 and even-eights performances unlike some previous swing feel tracks. Regardless of the member or song, we had a great time listening to “Circle of Life” thanks to the musicians’ brilliant work. You can perceive the wall between Bedikyan’s “European” style and “Americanized” piano. Also we think it’s good not to feel the Turkish flavors (looks like he is Armenian in origin). Experienced producer Nils Winther makes us feel good with this release by the changing style of SteepeChase/Lookout.  !! Evaluation: 4 Stars (****) over 5 !![Source: http://narymusic2010.blog90.fc2.com/blog-entry-2799.html]

DISTRITOJAZZ.COM
BURAK BEDIKYAN – “CIRCLE OF LIFE” CD REVIEW (11/09/2013)
Steeplechase spends time discovering new values for Jazz all over the world and this time the chosen one has a story to tell us.
Burak Bedikyan is an Armenian-Origin Christian Turkish pianist who showed great courage to release his debut album “Circle of Life” (Steeplechase/Lookout) surrounded by American fellows to prove us the significance of his work. The saxophone is played by Chris Potter, the bass by Peter Washington and the drums by Bill Stewart.
Burak took his first step in the classical music and met with jazz in 1996. He worked with the greatest musicians in Turkey where he was born and raised. Now it seems like it is time to take a new step in his career.
His first album stands before us with its beautiful and intact harmony . Hesitations, wisely-taken decisions, skills and ideas to be conceived better in the future are all fascinating.
The chosen company is elegant and powerful. There are tracks molded masterfully by Washington and Stewart as the first track of the album (“First Steps”) which first seemed like composed by Potter and Bedikyan’s fellows rather than himself.
The pianist launches intrepidly his own repertoire full of Bebop with references to the greatest musical masters like Thelonious Monk and Tommy Flanagan to whom he dedicated “TF” without losing his composure ever.
There is time to arrange an A-Class version of “Here, There and Everyhere” of the Beatles and to play a beautiful song that may make a considerable impact like “Do You Still Have Hope” or the sympathetic “Joy of Giving”.
Among songs which he considers more pleasantly and preferably as compared with his criteria are the peaceful “Melancholia” and “Prayer For Forgiveness” in which free-improvisation is emphasized.
“Circle of Life” is a relatively dispersed work like many debut albums, but it leaves a good taste in the mouth and involves beautiful concepts which make us to perceive Burak Bedikyan’s expectations in his career. Besides,  we are sure about that Turkish pianist will achieve a phenomenal success in the future. [Source: http://www.distritojazz.es/2013/09/burak-bedikyan-%E2%80%98circle-of-life%E2%80%99/]
[Jazz & Audio Encounters][New Arrivals] 24-08-2013 / Tokyo
BURAK BEDIKYAN / CIRCLE OF LIFE
Burak Bedikyan, the leader of the album, is  a pianist from Turkey surrounded by a luxurious line-up featuring Chris Potter, Peter Washington and Bill Stewart.
The first track is a four-beat song which is quiet entertaining. Enjoyed the increasing tension of Chris Potter’s performance during his solo. Moreover, Burak Bedikyan’s piano which accompanies the solo feels good.
The second track is the famous song of Beatles which is played with a typical tension arrangement such as the “First Trip” of Herbie Hancock. Compared to the former song, you may witness the profundity at the heart of Burak Bedikyan when you hear the trio’s rendition. [By the way, some other following songs were also performed as trio (#4/#8/#12).]
The 5th and 6th tracks (Prayer for Forgiveness) are in a single musical package, and the 5th song sounds completely improvised. The 6th title “Serenity” seems like a themed structure. Bill Stewart supports Chris Potter and Burak Bedikyan at a minimal level using colorful sounds. The main melody of this song lasting less than two minutes is interpreted by Chris Potter.
The 7th song “Joy of Giving” is a pleasant rhythmic Latin melody played by Chris Potter.
“Melancholia” is the one with a sedate theme beginning from the 9th track with a duet intro. It is a performance which reflects beautiful melodies played by Burak Bedikyan. And Chris Potter enjoys the taste right here.
“Circle of Life” is a Jazz album, mainly focused on four-beat pieces, presenting artistic works compacted with spiritual performances.
Burak Bedikyan delivers a superlative pleasure with his piano performance which you will enjoy by listening to his original themes. His wonderful comping behind the saxophone has taste and there are almost no trio performance which disregards the main melodies.
I think the best track is the Latin song “Joy of Giving” in which the general feeling is beautiful.
[Source: http://blogs.yahoo.co.jp/pabljxan/62113026.html]